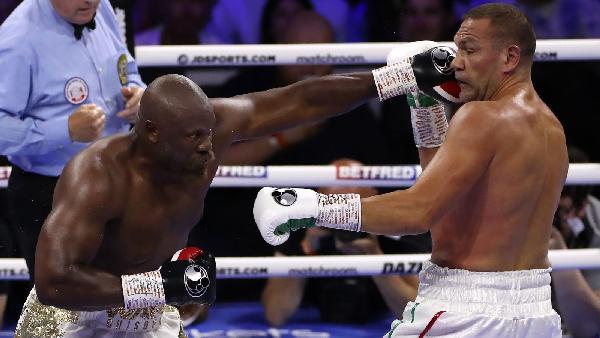 The 38-year-old - an underdog heading into the fight - went toe-to-toe with Bulgarian Pulev, 41, with both men landing throughout the contest.

Chisora gains revenge for his 2016 split decision defeat by Pulev.

"You are not here for long, I need the hard fights."

Pulev suffers his third defeat in 32 bouts, having also lost in world title challenges to Wladimir Klitschko and Anthony Joshua.

It may not have been the most technical bout of all time, but Pulev-Chisora was a fight in which two veterans of the heavyweight division traded punches relentlessly for almost the entirety of the contest.

Chisora promised he would stick it on Pulev from the first bell and, in front of a raucous crowd of 7,000, was the aggressor straight away, forcing his opponent on to the back foot.

Pulev's clinching prevented Chisora from finding leverage in the opening two rounds, but the Briton's work to the body was particularly impressive.

Chisora bulldozed forward with little regard for his own defence or safety, but Pulev began to find success with his jab and landed the cleaner punches as his opponent lost momentum in rounds three to five.

It was a scrappy affair at times, with both fighters leading with their heads, getting tangled up on the inside and warned by the referee on several occasions in the middle rounds.

The bout really picked up in the second half, however.

In the seventh round, Chisora unleashed his trademark overhand lefts and rights. Not everything landed cleanly, but each wild swing spurred the crowd into action, with Pulev cut above the right eye.

A Pulev right uppercut in the eight, teed up by a straight left, wobbled and hurt Chisora. In the ninth, however, it was Pulev holding on as the Briton came back fighting. Two huge rights and a cracking left landed on Pulev, who was somehow still standing.

Pulev landed a right after the bell in round 10, Chisora reciprocated with a punch of his own as the referee - not for the first time - intervened.

Both boxers may have felt the fight was still there for the taking in the final round, and it Chisora who landed the more telling blows.

The story of Chisora goes on, but perhaps not for much longer.

He said: "I was hurt [by the uppercut in the eighth round]. I wont stand here and say I wasn't hurt. I had to regroup and shut that door again.

"I'm excited because I am on my way out, I'm not going to lie. But before I go out I want to give you guys a show."

Promoter Hearn described the Pulev clash as a "must-win" fight for his boxer.

Speaking after the fight, Hearn added: "People talk about Chisora and say 'should he hang up the gloves'. He has just beaten a top 15, top 10 heavyweight in the world so how can you criticise him?

"If he is winning fights like that against the standard of Kubrat Pulev, why not carry on in the sport?"

Four defeats in a row, however, would have been hugely damaging for any boxer, particularly those at the back end of their career.

But Chisora is not just any boxer; there is no suggestion he would have retired even if he had lost.

Who is next for Chisora?

A trilogy fight with rival Dillian Whyte - who lost to Tyson Fury in April - would appease those boxing fans who want to see them meet again. The first fight was a heavyweight classic which Briton Whyte edged. Chisora was ahead on points in the rematch before being knocked out in the 11th round.

There has been talk of former WBC champion Deontay Wilder as a potential opponent for Chisora. The American has brutal one-punch power, but showed his vulnerabilities in consecutive losses to Fury.

A win over Chisora, who some may describe as a gatekeeper to a world title, will show us what Wilder has left in the tank.

Chisora was all but set to face Poland's Adam Kownacki but that fight fell through, with Pulev selected as a replacement. On paper, Chisora and Kownacki is a barnstormer, with two styles likely to gel.

Domestically, there is WBA 'regular' champion Daniel Dubois or contender Joe Joyce. While a clash with Chisora will attract fans, there is little to gain for two fighters who have their eyes firmly set on title fights.

"He hasn't got many left but while he feels good, feeling motivated and feeling fulfilment in the ring and he is fit and healthy, we will keep rolling the dice," Hearn said.

"He wants to go somewhere in the Middle East, he wants to cop the caviar. There are some really good fights out there for him."

What Chisora does next awaits to be seen, but fans have once again been entertained.

From getting heated with his opponent at the press conference and being separated by security to wearing a Boris Johnson mask at the weigh-in, it has been another bizarre Chisora fight week.

He is back to winning ways, and there are no signs of him calling it a day.