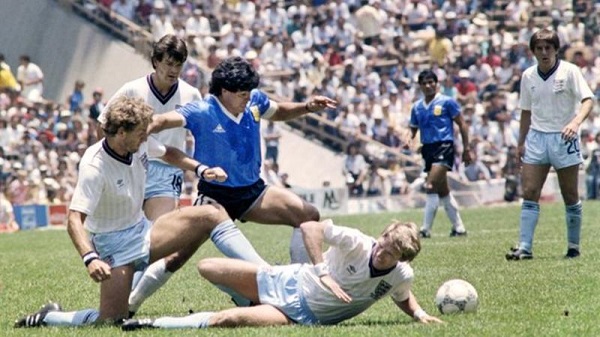 The shirt Diego Maradona wore when he scored the 'Hand of God' goal and much vaunted 'goal of the century' for Argentina against England at the 1986 World Cup has sold for a record £7.1m.

It is the highest price ever paid for a piece of sports memorabilia.

Former England midfielder Steve Hodge put it up for auction 36 years after he swapped it with Maradona following the famous quarter-final in Mexico.

After Maradona died in November 2020, Hodge said the shirt was not for sale.

In December that year Hodge said he had "people knocking on my door non-stop" and that reports he was looking to sell the shirt were false.

"I find it disrespectful and totally wrong," he added at the time. "It's not for sale. I am not trying to sell it."

Auction house Sotheby sold the shirt for more than its estimated price, which was between £4m and £6m.

"This is arguably the most coveted football shirt to ever come to auction, and so it is fitting that it now holds the auction record for any object of its kind," said Brahm Wachter, Sotheby's head of streetwear and modern collectables.

The previous highest fee paid for a shirt worn during a sports match was held by New York Yankees legend Babe Ruth's baseball jersey, which sold for $5.6m (£4.4m) in 2019.

In the same year the original Olympic manifesto, penned in 1892, sold for $8.8m (about £7m) to become the most expensive piece of sports memorabilia.

Ex-Nottingham Forest, Aston Villa, Leeds and Tottenham midfielder Hodge, 59, who appeared in two World Cups for England and won 24 caps, had owned the iconic blue Argentina away shirt since swapping it with Maradona in the tunnel at the Azteca Stadium in Mexico City after the game, which Argentina won 2-1.

There has been some confusion about the shirt since Sotheby's in London put it up for auction in April, with Maradona's family claiming it was not the shirt he had on when he scored the infamous 'Hand of God' goal.

During the past 36 years, the shirt, manufactured by Le Coq Sportif, has been publicly displayed as the one worn by the Argentine great. It was most recently housed at the National Football Museum in Manchester.

Sotheby said in its listing online that the shirt was matched to images of Maradona wearing it for both goals.

The two he scored against England are among the most famous goals by Maradona, who is widely regarded as one of football's greatest-ever players.

His punching of the ball beyond goalkeeper Peter Shilton to score the controversial opening goal in the second half came minutes before he netted what was years later voted the goal of the century in a poll by football's world governing body Fifa.

Maradona went on to inspire his country to win the trophy, beating West Germany 3-2 in the final 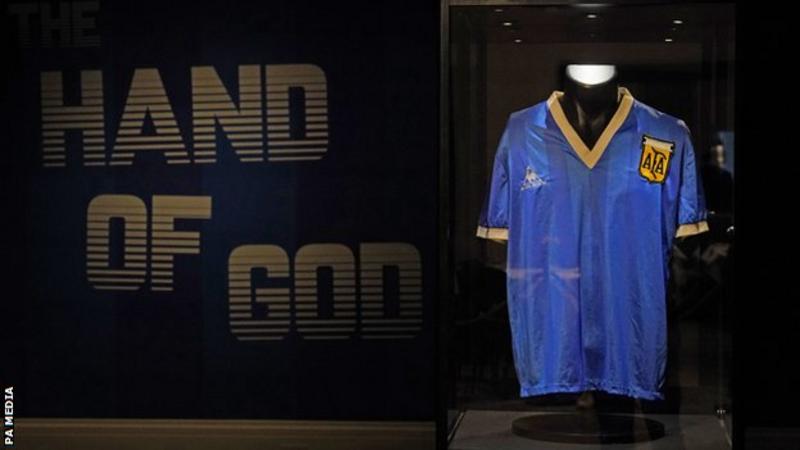