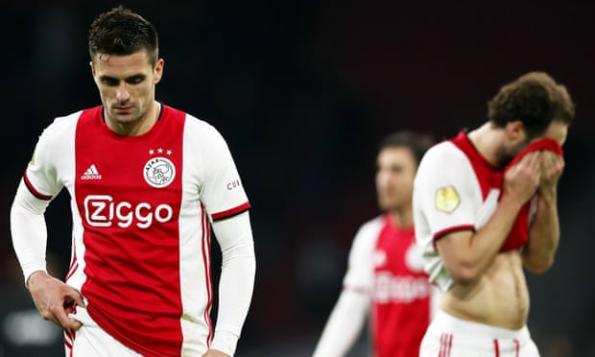 The Dutch football association has admitted the season was effectively ended on Tuesday after the government extended a ban on major public events by three months.

In a statement, the countryâ€™s FA, the KNVB, said it would not continue efforts to try to complete the 2019-20 campaign, but would first consult with Uefa, which has been pushing member countries to try to finish their seasons.

The Dutch prime minister, Mark Rutte, banned events including professional sports and music festivals until 1 September to prevent a resurgence of coronavirus infections.

â€œBased on the governmentâ€™s decision today, the KNVB will consult with Uefa after which a decision will be confirmed. On Friday, the clubs and other parties involved will meet to discuss the consequences.â€

Fridayâ€™s meeting is set to clarify whether the season will be cancelled, leaving all results and league positions null and void, or whether prizes will be handed out for the campaign will be handed out based on results to date. The latter prospect appears unlikely given the tightness of theÂ EredivisieÂ table, where Ajax are top but on the same number of points â€“ 56 from 25 matches â€“ as second-placed AZ Alkmaar.

The Dutch follow neighbours Belgium, who had already cancelled their season, but ran into criticism from Uefa, who warned them they may not be able to enter clubs in next seasonâ€™s European competitions. Sweden earlier revealed its hopes ofÂ restarting its top two leagues on 14 JuneÂ with fans present.

The KNVB statement added: â€œThat the events requiring a permit remain prohibited until 1 September now offers clarity. Football under the auspices of the KNVB will not be played as long as the government does not consider it safe.â€

It said it had not cancelled the season earlier to avoid potential financial losses to its clubs. â€œAs in other parts of our economy, efforts were being made to protect the industry as much as possible against the financial consequences of the current crisis.â€

Rutte said limitations on the easing of restrictive measures were necessary to prevent a new wave of Covid-19 cases. Speaking in a news conference, he said: â€œItâ€™s better to be cautious now than to have regrets later.â€