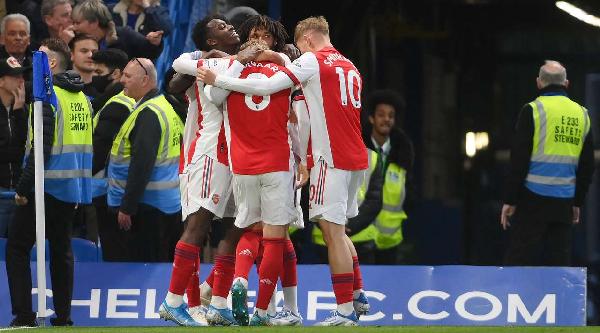 Eddie Nketiah's brace led Arsenal to a 4-2 victory over Chelsea at Stamford Bridge in a crucial win for their top-four aspirations.

Three times Arsenal went in front on the night, the first coming through the 22-year-old striker who coolly slotted past Edouard Mendy after a scuffed backpass from Andreas Christensen.

Timo Werner's deflected shot brought Chelsea level soon afterwards, but the Gunners retook the lead in some style when Bukayo Saka raced down the right flank before squaring for Martin Odega.

Mason Mount's superb inswinging cross from the left flank was met by an equally smart finish from Cesar Azpilicueta to bring the Blues level a second time just after the half-hour mark.

Nketiah ultimately sealed the game 12 minutes into the second half when Malang Sarr's touch fell into his path and he poked past the goalkeeper.

Saka was dragged down off the ball by Azpilicueta in the final minute and the England forward got up to send Mendy the wrong way from the spot.

Arsenal are now level on points with Tottenham but with an inferior goal difference. Chelsea are five points clear in third.

Elsewhere, Miguel Almiron scored his first club goal since February 2021 as Newcastle beat Crystal Palace 1-0 to record a sixth consecutive win at St James' Park and move on to 40 points in the Premier League.

Almiron finished magnificently from Bruno Guimaraes' lofted pass to lift Eddie Howe's side up to 11th in the table and all but guarantee the Magpies' place in the top flight next season.

Guimaraes and Allan Saint-Maximin tested Vicente Guaita in a one-sided first half, while the impressive Joelinton sent a header looping over the crossbar not long after the interval.

Zaha also sent a curling effort inches over the crossbar in the final minute of second-half stoppage time.

Patrick Vieira's side drop to 14th after suffering back-to-back league defeats for the first time since the turn of the year.