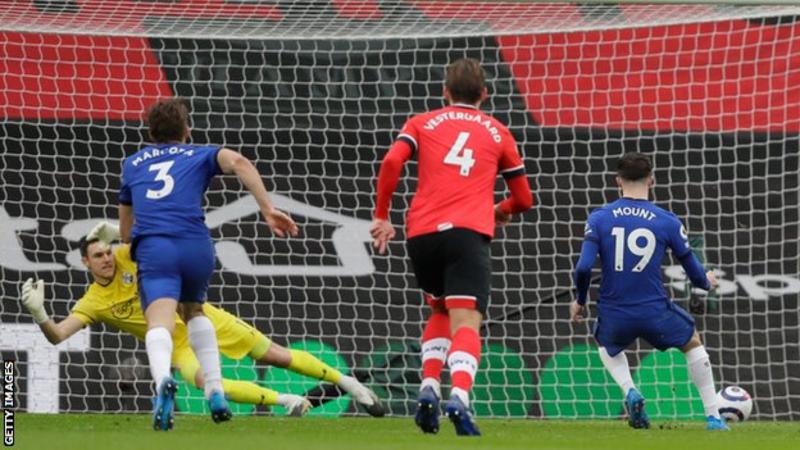 Mason Mount's second-half penalty earned Chelsea a point as they came from behind to draw at Southampton, who ended a run of six successive defeats in the Premier League.

The hosts took the lead against the run of play in the first half when Nathan Redmond played a brilliant ball to send Takumi Minamino clear and the on-loan Liverpool striker showed great composure to slot beyond Edouard Mendy.

But the Saints gifted Chelsea an equaliser eight minutes after the break when Danny Ings brought down Mason Mount inside the box and the Blues midfielder stepped up to send Alex McCarthy the wrong way from the penalty spot.

Chelsea were unable to kick on after that and instead it was Southampton who went closest to grabbing a winner as Jannik Vestergaard hit the crossbar with a header before Ings put the loose ball into the side-netting.

The point means Chelsea stay in fourth place on 43 points while Southampton are 13th on 30 points.

Southampton were third on 16 December but a terrible run of losses going into this game had seen then slide down into the bottom half of the table. While they may not have been nervously over their shoulder, arresting their alarming slide down the table had become a priority.

For large periods against Chelsea they were like a plucky lower league side aiming to shock a Premier League opponent. They barely saw the ball for the majority of the first half and it was from their first touch inside the Blues' area that they got the goal with a brilliantly composed finish by Minamino.

However, no side has dropped more points from winning positions in the Premier League than Southampton and once again they were their own worst enemy as Ings gave away a penalty with Chelsea having rarely looked like creating anything from open play.

While it could have been an even better result, particularly with Vestergaard hitting the woodwork, the point is a positive against an in-form Chelsea. They will hope it provides a good base to try and build from before a tricky-looking run of four successive away games in the Premier League.

A good test for Tuchel
Thomas Tuchel enjoyed a near perfect start to his reign at Chelsea, winning four of his first five Premier League games and drawing the other one - a goalless stalemate with Wolves in his first game in charge.

The Blues had never been behind during that run, so Minamino's goal - the first scored by an opposition player since Tuchel's arrival - presented a new challenge for the German in his short time so far in England.

Even before the Southampton goal, Chelsea had struggled to break down their stubborn opponents and that continued after Mount equalised from the penalty spot.

The visitors' attacking play became increasingly sloppy as frustration grew with their inability to find a way through the Southampton defence, exemplified by a poor Reece James finish when he lashed over at the far post.

Tuchel showed he is not afraid to make tough decisions when things are not working for his side. He replaced Callum Hudson-Odoi on 76 minutes despite the winger having only come on at half-time and after the game was critical of the player's body language.

Failure to win meant Chelsea missed the opportunity to strengthen their position in the top four but Tuchel will have learned a lot about how his side fare when they come up against sides set up to stifle them.