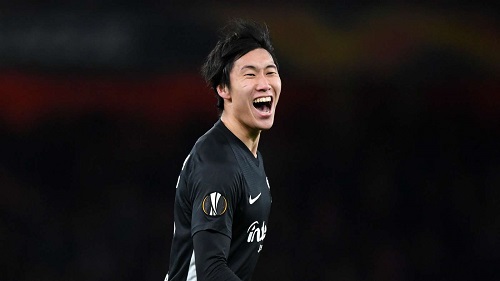 The Gunners are now without a win for seven matches across all competitions, with two rasping strikes from Japan forward Kamada adding to the impression Emery was on borrowed time at a sparsely populated Emirates Stadium.

Pierre-Emerick Aubameyang gave Arsenal a deserved lead at the end of a first half they dominated, with Granit Xhaka slotting back into the midfield for the first time since being stripped of the captaincy.

But the brittle nature of their collapse spoke of a club in turmoil and a positive result at Standard Liege in a fortnight's time may be needed to be absolutely sure of progress to the knockout stages.

Who might be in their dugout at that stage feels less clear.

Arsenal were on top early on. Bukayo Saka raided down the Frankfurt right in the 11th minute but Joe Willock and Aubameyang appeared to get in each other's way and the latter headed wide.

Gabriel Martinelli passed up chances to add to his haul of three Europa League goals this season when he shot too close to Eintracht goalkeeper Frederik Ronnow from a Xhaka corner and saw Gelson Fernandes clear his header from the subsequent set-piece off the line.

Ronnow dashed out to deny Saka when the winger darted in behind David Abraham, also saving from the teenage winger in the 41st minute.

David Luiz departed with a chest injury in between those two chances and Aubameyang blasted in via Ronnow's leg and the crossbar during the resulting period of stoppage time.

Martinelli played in Willock shortly after half-time but the midfielder misjudged his dinked finish and Ronnow was able to save.

It meant Kamada's spin infield and shot into the top corner from the edge of the box in the 55th minute was against the run of play.

The same could not be said when, after Emiliano Martinez saved sharply from Filip Kostic, Kamada was afforded ample room from similar range to dispatch a partially cleared  64th-minute corner.

To compound matters, Shkodran Mustafi hobbled off and Arsenal never recovered their poise. It remains to be seen whether Emery will be given the chance to recover his own poise.