Everton hold Liverpool to a draw in Merseyside derby 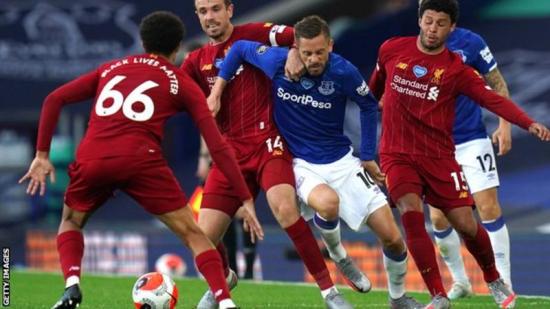 Liverpool edged closer to their first league title in 30 years but were frustrated by an obdurate Everton in a 0-0 derby draw at Goodison Park.

The Toffees are now winless in 19 Premier League matches against their local rivals, although that statistic did not appear to weigh upon Carlo Ancelotti's approach as his side offered scant attacking threat.

They still came closest to breaking the deadlock 10 minutes from time, though, as Tom Davies hit the post after Alisson had kept out Dominic Calvert-Lewin's clever flick.

Jurgen Klopp left Mohamed Salah unused on the bench and his team need four more points to become champions, although that equation will change if Manchester City fail to beat Burnley on Monday.

An early error from Fabinho let Richarlison loose to flash a shot across the face of Alisson's goal.

Everton centre-back Michael Keane, booked for an earlier foul on Mane, produced a vital block to thwart Minamino before half-time, by which point Liverpool had lost James Milner to a hamstring injury and sent on Joe Gomez.

It made Richarlison's shank into the Gwladys Street End with Virgil van Dijk breathing down his neck all the more frustrating.

Trent Alexander-Arnold had a 63rd-minute free-kick deflected over before Joel Matip joined Milner on the injury list.

In the context of a dour contest, Everton launched a stirring late rally, Davies agonisingly close to snatching glory and Alisson frustrating his compatriot Richarlison once more after Calvert-Lewin sent a diving header wide.