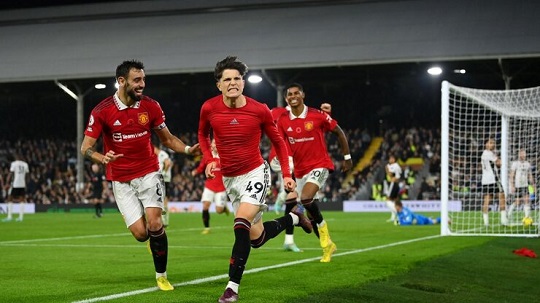 Erik ten Hag’s men had been largely outplayed in the early going, but showed a clinical edge to break the deadlock through a trademark transition. Casemiro won the ball on the halfway line and United moved it quickly, with Bruno Fernandes working the angle to shoot, with his wayward effort that was drifting wide steered home at the back post by Christian Eriksen. The Danish international netted for the first time since signing for the Red Devils - also his 150th senior career goal.

Frustration for Marco Silva as his men were behind at the break despite being the better side between the boxes, and he breathed a sigh of relief in stoppage time when Eriksen missed a big chance to double the United lead. An uphill task appeared to face Fulham, given that ten Hag’s side are the only team in the division yet to drop a point from winning positions so far this term.

The visitors remained a threat behind the Fulham backline, with Bernd Leno called into action after the restart to deny Anthony Elanga and Marcus Rashford in quick succession. His opposite number, David De Gea, showed his tremendous goalkeeping skills by making a double save of his own, denying powerful close-range efforts from Carlos Vinícius and Tim Ream.

A substitution on the hour mark paid immediate dividends for the hosts who grabbed an equaliser. Dan James came back to haunt his old club, slamming home from close range after being expertly picked out by Tom Cairney. Momentum was firmly with Fulham but carving out further clear-cut chances proved a problem, and the visitors’ introduction of Garnacho added a new dynamic to their attack. He combined with Luke Shaw to give Scott McTominay a free header, but the Scottish international couldn’t keep it down.

The young Argentinian would not be kept out of the game though and struck a dramatic winner. A sharp one-two with Eriksen gave the 18-year-old the opportunity to sprint beyond Bobby Decordova-Reid and stab home a crucial goal that sends United into the FIFA World Cup just three points adrift of the top four. Fulham succumbed to a stoppage-time defeat to a Manchester club for the second time in a week, heading into the mid-season break without a win in four league games.