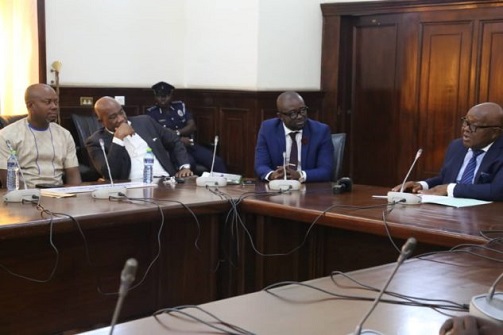 The Executive Council of the Ghana Football Association has paid a courtesy call on the Speaker of Parliament, Rt. Hon. Prof. Mike Ocquaye, and the Parliamentary Select Committee on Youth Sports and Culture.

The meeting was part of the GFA’s ongoing engagements with key stakeholders, and the visit to Parliament was particularly aimed it introducing the GFA Executive Council members and its President to Parliament, as well as to discuss with the Select Committee important issues of concern.

The Speaker, on behalf of Parliament, congratulated the GFA President, Kurt Okraku and the Executive Council on their election, and urged them to take seriously, the mandate given them to manage Ghana football.

“May I congratulate and your team for going through an elective process and coming out victoriously. This is an example of the deepening of the democratic process in our country,” said the Speaker.

Delving into issues of concern to him in Ghana football, the Speaker expressed worry over Ghana’s inability to win trophies on the African continent in recent time, adding that his concern is also a major concern for many Ghanaians.

He therefore, charged the GFA President and the Executive Council to work hard towards restoring Ghana to its rightful place at the apex of African football.

The Speaker also made a passionate appeal to the GFA to pay special attention to women’s football, stressing that Ghanaian women footballers have great potentials which can be harnessed to make Ghana proud.

He also urged the GFA to pay special attention to the domestic league and make it more competitive and exciting.

GFA President Kurt Okraku expressed the Executive Council’s appreciation to the Speaker for the warm welcome accorded him and his team.

Mr Okraku added that their presence in Parliament demonstrated their readiness to partner with Parliament and key stakeholders, particularly government agencies, for the realization of their stated vision for Ghana football.

He assured the Speaker that he and his team have already put in place innovations in place to address some of the issues he raised, including making the league more competitive and more exciting.

Mr. Okraku made a special appeal to Speaker Mike Ocquaye for Parliament to have a second look at aspects of the white paper issued on the 18-year-old Gbadegbe Commission report for the betterment of Ghana football.

The  GFA President explained that aspects of the report were a great hindrance to the development of domestic football because it limits the GFA in scheduling games between Kotoko and Hearts in the evening, as well as on mid-week.

He added that after eighteen years, and with improvements in infrastructure, technology and attitude, it was time Parliament considered an amendment to pave the way for the GFA to move in line with contemporary way of scheduling games.

He, therefore, appealed to the Speaker and Parliament to consider his proposal.

MEETING WITH PARLIAMENTARY SELECT COMMITTEE ON SPORTS, YOUTH AND CULTURE

The Committee warmly welcomed the GFA delegation and congratulate the President, Kurt Okraku and members of the Executive Council on their election.

Both the Chairman and Vice Chairman of the Committee, Hon. Alex Kofi Agyekum and Hon. Kojo Asemanyi said it was appropriate for the Committee to invite the President and the newly elected GFA Executive Council for familiarization and also to discuss issues of importance in Ghana football.

The Committee reminded the President and the Executive Council of the huge challenges ahead in reviving Ghana football. They, however, expressed optimism that the mandate given them by the football community is enough testimony of the confidence the people have in them.

Addressing the Committee, the GFA President, on behalf of the Executive Council, expressed appreciation to the Parliamentary Select Committee on Sports for the opportunity to interact with them.

The GFA president reiterated the FA’s firm belief that government is a strategic partner for the development of football in the country, and assured the Committee of the GFA’s commitment to strengthen its relationship with the Select Committee.

He briefed the Committee on the new vision of the football Association and its programs including the return of domestic football in the country next month.

The GFA President named the various innovations which have been introduced to make both the domestic league and Ghana football better. Some of the innovations he mentioned included a new refereeing strategy and restructuring of the secretariat, which includes establishing new departments to ensure efficiency.

The GFA President appealed to the Committee to assist the GFA in its quest to find funding for all levels of domestic football in the country.

The Committee commended the GFA President and the Executive Council for their elaborate vision, particularly their plans to focus on football at the regional level, as well as colts football across he country.

Both the Executive Council and the Select Committee reiterated their commitments to strengthen relations between the two bodies.