Giroud annoy fans with celebration despite getting a draw for Arsenal 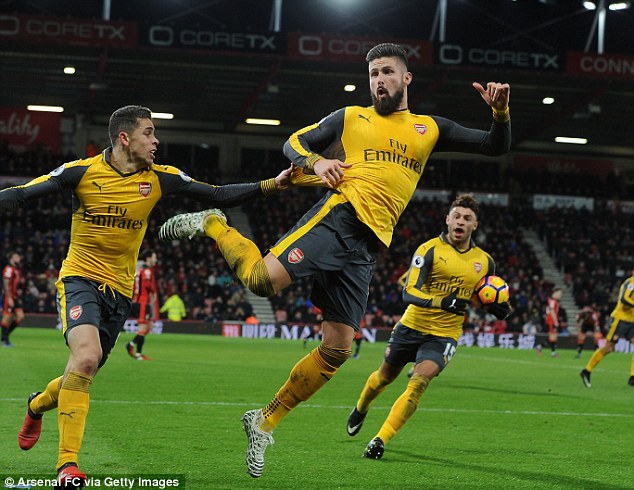 Arsenal came back from three goals down to draw 3-3 with Bournemouth on their Premier League clash on Tuesday night.

Despite scoring a stoppage-time equaliser to complete a remarkable comeback, Olivier Giroud has managed to rile Arsenal fans.

The Frenchman, who seems to be stuck in a perennial love-hate relationship with Gunners supporters, netted his side's third in an extraordinary 3-3 draw.

After his dazzling scorpion kick against Crystal Palace two days previously, the strike at the Vitality Stadium ought to have seen the forward free from criticism... at least for a few days. But Giroud's celebration made sure that was never likely to be the case.

Having netted with a 92nd-minute header on the south coast, the frontman wheeled away towards the travelling Arsenal fans, leaping in the air and slapping the outside of each of his feet in homage to his New Year's Day wondergoal.

While Alex Oxlade-Chamberlain grabbed the ball and yelled at him to get back into his own half and Gabriel almost ripped the shirt off his back, Giroud was intent on completing his celebration.

By the time he'd finally emerged from the crowd, most of his team-mates were waving urgently at him to get a move on.

With four more minutes of added time still left to play, it might have been wiser to follow that advice and hurry on back to the centre circle.

Alexis Sanchez certainly seemed to think so, with the Chilean throwing a motherly glare at the striker as he pranced towards the away 'end' performing a routine that merged Gene Kelly and Basil Fawlty in one uncomfortable bundle.

The backlash was quick and vicious on social media, as many Gunners supporters turned on Giroud for perceived timewasting.

And the Morecambe and Wise-esque performance did not go down well.

Twitter users branded the display 'embarrassing', 'hideous', 'bizarre' and 'stupid' - among other, less subtle descriptions - with only a handful standing up for the striker.

Comments on the Sportsmail match report were equally scathing, with one user writing: 'Giroud celebrating an extra-time equalizer against a 10 man Bournemouth side, instead of racing back to the half way line sums up Arsenal's mentality.'

Another wrote: 'Says a lot that they celebrated the 3rd so long instead of grabbing the ball and running back for the winner.'

All told, though, Giroud's celebration lasted a total of 12 seconds before he jogged on back for the restart.

And Premier League referees, as a rule of thumb, will generally add on 30 seconds every time a team scores.

Three goals in as many games, including quite possibly the standout strike of the season, and still the scapegoat.

It's impossible to please everyone. Daily Mail