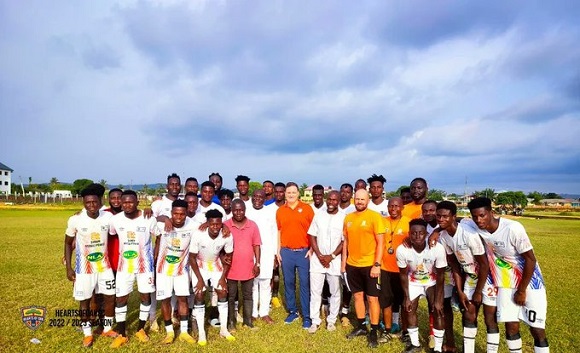 Hearts of Oak’s head coach, Slavko Mati has given his players and backroom staff a one-week break.

The break started soon after the Sunday game against Dreams FC and the players are expected to report to training Monday, November 28, 2022.

Coach Matic will from Monday take advantage of the break in the league to fine-tune his squad ahead of the resumption of the betpawa Ghana Premier League next month.

The league is expected to resume soon after the FIFA World Cup tournament in Qatar.

Hearts of Oak on Sunday came from a two-goal lead to draw 2-2 Dreams FC on Matchday 8 of the betPawa Premier League.

David William Van Dijk scored in the 14 minute after Ismael Dede worked his way through the Hearts of Oak backline before laying a pass to Van Dijk to tap home. The Still Believe lads doubled their lead three minutes after the break as he headed home a rebound from a corner kick.

Hearts of Oak who went into the game without their captain Gladson Awako halved the deficit in the 75 minute when Collins Boah scored an own goal after miskicking an attempt over the head of goalkeeper Lord Bawa Martey.

Benjamin Yorke scored the equalizer for Hearts of Oak in added time after coming on a substitute for Rashid Okine in the 80 minute.

The result took Hearts of Oak to the 5 spot with 13 points – one points behind rivals Asante Kotoko and three adrift of leaders Aduana FC.