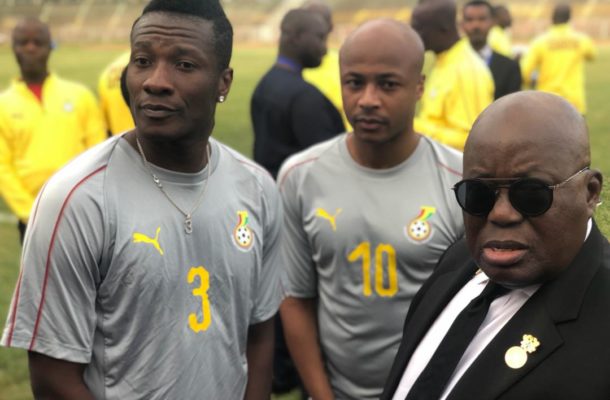 Asamoah Gyan has revealed that he will today May 22, 2019 release a statement based on the telephone conversation he had with President Akufo-Addo over his premature retirement.

President Akufo-Addo on May 21, 2019, had a telephone discussion with Gyan and urged him to rescind his decision to retire from the Black Stars over the captaincy issue.

Gyan also added that his manager Samuel Anim Addo will be speaking on his behalf regarding his retirement from the Black Stars.

Gyan on Monday, May 20th announced the decision to recuse himself from the upcoming 2019 African Cup of Nations (AFCON) tournament and also retire from the national team over fears he may lose the captaincy.

The 33-year-old forward, in a statement, barely 24 hours to the release of Ghana’s provisional squad by head coach Kwasi Appiah, said that he would not be a member of Ghana's team for the 2019 AFCON, which takes place in Egypt between June 21 and July 19.

Director of Communications at the Presidency Mr Eugene Arhin confirmed via Facebook that the President has urged the Kayserispor forward to reconsider his decision to retire from the Black Stars.

"The meeting, a continuation of the regular meetings the President holds with them, discussed, amongst others, the preparations being made towards AFCON 2019, and how to end Ghana’s AFCON trophy drought," Mr Arhin wrote on Facebook.

"President Akufo-Addo, subsequently, also spoke on the telephone with Asamoah Gyan, and informed him of the considerable national disquiet over his decision to retire from the Black Stars," he added.

He added that the President urged him, in the national interest, to rescind his decision to retire from the Black Stars, and make himself available for selection by Coach Kwasi Appiah.