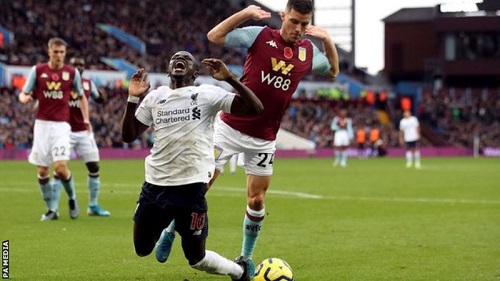 Liverpool forward Sadio Mane says he will not change his style of play, despite manager Jürgen Klopp having to defend him from diving accusations.

Mane, 27, was cautioned in the 37th minute of Liverpool's 2-1 win over Aston Villa on Saturday.

"There was contact [at Villa] for sure. Maybe it was not a penalty and he didn't give it, and he gave me a yellow card. To be honest I don't have any problem about it."

Reds boss Klopp defended the Senegal international after his booking saying: "Sadio is not a diver. There was a situation in the Aston Villa game where he got contact and went down, maybe it was not a penalty but there was contact. It's not as if he jumped over a leg and went down."

Mane joked that if the chance came again he would dive for a penalty.

He said: "If the 'dive' will give me a penalty then I will do it. Why not? But what Jürgen said is correct. I do not dive."