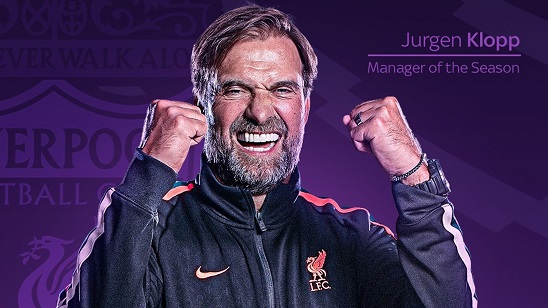 Jurgen Klopp has been named the Premier League's Manager of the Season - pipping rival Pep Guardiola to the prestigious award.

The German has received the honour after guiding Liverpool to second in the Premier League, finishing one point behind Guardiola's Manchester City in an enthralling title race. It's the second time Klopp has won the competition's Manager of the Season prize.

The Liverpool boss has also won the League Manager Association's (LMA) Manager of the Year award for the second time. The prize is named after legendary Manchester United coach Sir Alex Ferguson, who won the honour a record five times during his career.

Klopp has received the LMA award after leading Liverpool to FA Cup and EFL Cup glory. The Reds have also reached the Champions League final and will face Real Madrid in Paris on Saturday evening, as they look to complete a unique treble.

Klopp received both awards at a ceremony on Tuesday, hosted by the LMA. "It was a bit nervy, it wasn't the best outcome for us, but we are already over it," said the German when asked about the climax of Liverpool's Premier League campaign at the ceremony.

"And when you win a prize like this you are either a genius, or you have the best coaching staff in the world. I am here with four of my coaching staff, and they know how much I appreciate them."

Guardiola and Klopp were two of the five nominees for the Premier League's award - voted for by the fans. The other three were Newcastle's Eddie Howe, Crystal Palace's Patrick Vieira and Brentford's Thomas Frank. Guardiola is a three-time winner of the prize.

When it comes to the LMA's honour, Guardiola won the Sir Alex Ferguson Trophy last year for the second time. That prize isn't always given to the Premier League's leading boss, with Chris Wilder scooping the award at Championship side Sheffield United in 2019.