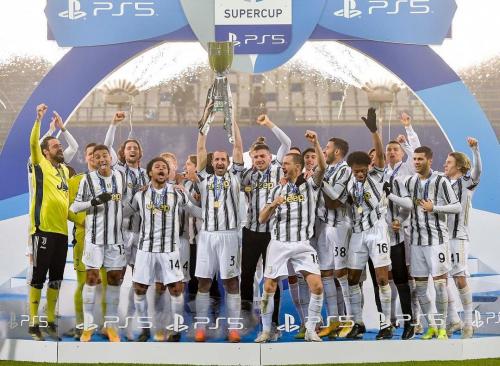 Cristiano Ronaldo hit the 760th goal of his career - earning a possible world record - as Juventus beat Napoli to win the Italian Super Cup and give Andrea Pirlo his first trophy as manager.

The Portugal forward volleyed a close-range opener, and substitute Alvaro Morata sealed victory in injury time seconds after a brilliant save from Juve goalkeeper Wojciech Szczesny.

Ronaldo's goal may have seen him overtake a disputed total from Josef Bican to become the highest scorer of all time.

Napoli's Lorenzo Insigne missed a penalty with 10 minutes left, before Italian champions Juve - who are fifth in Serie A after Sunday's 2-0 loss to Inter Milan - confirmed their ninth Super Cup win.

"It is a great joy to win a trophy," Pirlo told Rai Sport.

"It is even more beautiful than winning as a player. It is difficult to see beautiful finals. It was important to win above all after the defeat against Inter. We had to show our pride."

Pirlo's side controlled much of the game, but had their Polish keeper to thank for keeping Napoli at bay with two outstanding saves.

Szczesny's quick reactions saw him parry away Andrea Petagna's header from close range before half-time, and he was alert enough to extend his left foot out when diving the other way to stop Matteo Politano's shot in the fourth minute of stoppage time.

Ronaldo was Juve's main threat, scoring his 32nd goal in 32 games for his club when a corner fell perfectly for him in the six yard area after deflecting off Tiemoue Bakayoko.

Napoli, managed by Pirlo's former Milan team-mate Gennaro Gattuso, struggled to threaten an equaliser until Weston McKennie caught substitute Dries Mertens as he cleared in his own area.

Referee Paolo Valeri consulted with the pitchside monitor before awarding the penalty to Napoli, but Insigne sent his spot-kick wide.

Juve broke away after Szczesny's injury time save, with Juan Cuadrado's pass giving Morata a simple chance to seal the win.