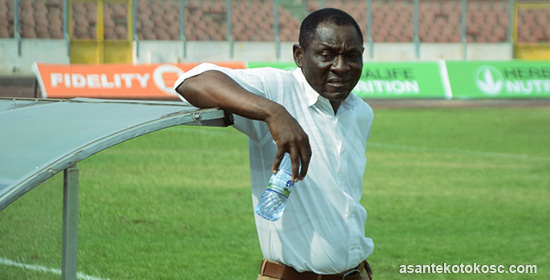 Coach David Duncan has been asked to step aside
Shares

The management of Kotoko has asked Coach David Duncan to â€œstep asideâ€ following the string of poor results recorded by the Porcupines in the 2015/16 Premier League.

That was the teamâ€™s third away defeat since February 20, 2016 when they lost 2-0 to WAFA. The Porcupines have since drawn two times and won only once.

Communications Manager, Kwaku Ahenkorah, told Asantekotokosc.com that: â€œManagement has asked Coach David Duncan to step aside until further notice and with immediate effectâ€.

â€œThe decision has become necessary after the clubâ€™s abysmal performance in the ongoing Ghana Premier League where Kotoko lies an unprecedented last positionâ€ on the league table with five points.

â€œAssistant Coach Michael Osei takes over as head of the technical team in the interim. Management further apologises to the teeming fans of the club for the performance displayed so farâ€ said Ahenkorah.

â€œWe will endeavour to turn the tables and send the club where it duly belongsâ€ he added.