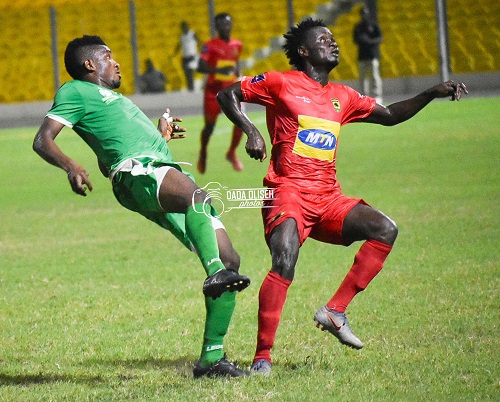 The final round of matches of Ghana Premier League match week 14 have been honoured.

Asante Kotoko found Elmina Sharks a hard nut to crack as they played a goalless draw game at the Accra Sports Stadium.

The Porcupines failed to breach the resolute defence of Sharks as they shared spoils on Thursday night.

Despite being victories in their matches at the Accra Sports Stadium, coach Yaw Acheampong charges became the first team to hold Kotoko to a draw at the nation's Wembley.

Earlier,Â Inter Allies claimed a vital away victory against Liberty Professional at the Carl Reindorf Park on match week 14 of the Ghana Premier League.

The Capelli Boys amassed the maximum points at the Carl Reindorf Park despite their captain and talisman Victorien Adebayor missing a penalty.

The visitors beat the Scientific Soccer lads 3-2 to move to 10th on the table with 19 points.

Inter Allies shot into the lead courtesy Samuel Armah in the 25th-minute mark before Victorien Adebayor scored his 12th goal of the season two minutes later as he now leads the goalking chart.

George Ansong reduced the deficit for Liberty 4 minutes to half time. He, after the break, drew the equaliser for the home side following a well worked move with the goal being his second on the day.

Victorien Adebayor failed to restore his side's advantage after his penalty was saved by Liberty's goalkeeper Ganiwu Shaibu.

However, Mohammed Zakari spared the blushes of Adebayor as he scored the winner for Inter Allies in the 88th minute.