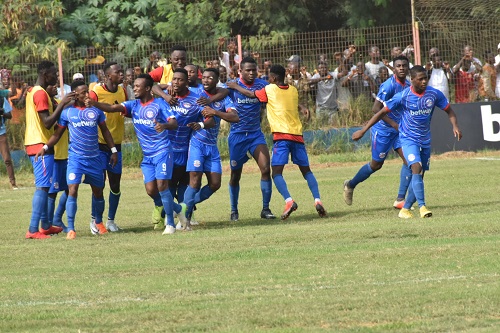 Asante Kotoko and Ashantigold shared spoils at the Baba Yara Sports Stadium. The Porcupines failed to breach the resolute defence of the Miners as they have drawn for the second successive game at their home venue following Liberty Professionals picking a point on matchday 7.Â

Over at the Accra Sports Stadium, Hearts of Oak returned to winning ways following Kofi Kordzi's last-minute strike. The Phobians beat the Bechem based club 3-2 to earn their first win at their home venue since beating Ebusua Dwarfs on matchday 3.

Daniel Afriye thought he had scored his maiden goal for the Rainbow Boys in the 8th minute but his effort was chalked offside. Twenty minutes later the visitors were awarded a penalty andÂ the resultant kick was scored by Prince Adu Kwabena, becoming his 7th strike of the season.

The two sidesÂ held their lines very well and managed to go into half time 1-1.

Hearts of Oak captain Fatawu Mohammed put his outfit ahead for the first in the game in the 63rd minute. However, Wontah Hafiz pegged them back but Kofi Kordzi scored his second on the day, late in the game which proved to be the match-winner for the Phobians.

Elsewhere in Dansoman, Liberty Professionals beat Aduana Stars 5-2 after their return to the Carl Reindorf Park.Â