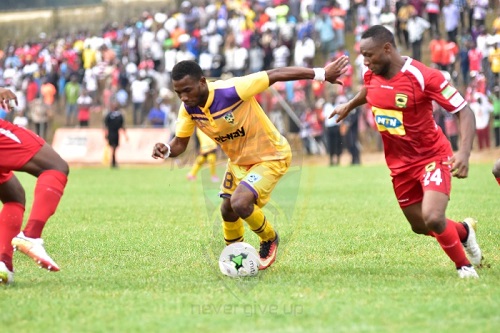 Kotoko lost narrowly in their last visit to the Akoon Park. But that was against Medeama SC in a week four fixture. Head Coach Maxwell Konadu will be counting on the brilliance of Black Stars new boy Habib Mohammed, Justice Blay and William Opoku Mensah who led the attack against Bechem.

Another refreshing news for Kotoko is the return-from-suspension of right-back Christopher Nettey. Karela United have put in a lacklustre performance in the campaign leading them to a stuttering 17th spot in the table, just five points richer than bottom-placed King Faisal.

The return of Diawisie Taylor proved useful at some point but the former Bibiani Gold Stars top marksman is struggling to rediscover his scoring boots.

With his rich vein of form, Prince Opoku Agyemang is expected to lead the line for Medeama SC against King Faisal at Techiman. The former New Edubiase United striker is the third-highest scorer in the ongoing Premier League. Opoku Agyemang has nine goals. His opposing striker, Ibrahim Osman of King Faisal also has 8 goals - but the youngsterâ€™s industry gets dimmed by a leaky defence which has allowed in 27 goals.

At the Nana Gyeabuor Park, Bechem United would fight for three points against struggling Dreams FC following their 3-1 loss to Asante Kotoko.

The Still Believe lads have gone four games without a win and a defeat against Bechem United could compound their problems.

Elsewhere, Elmina Sharks will be at home against Liberty Professionals while Great Olympics take on Ebusua Dwarfs at the Accra Sports Stadium. Eleven Wonders will lock horns with Berekum Chelsea in a regional derby at Techiman.

A clash of champions sees current title holders Aduana Stars lock horns with AshantiGold at the Nana Agyeman Badu I Park on Sunday. Aduana look favourites to carry the day coming off that 1-0 away win away at Dreams FC.

The Dormaa lads will rely heavily on 10-goal hero Yahaya Mohammed who has been called up for this monthâ€™s Africa Cup of Nations qualifiers against Sudan. Aside Yahaya, Aduana boasts a deadly weapon in Bright Adjei, Samuel Bioh and Caleb Amankwaah.

The woes of AshantiGold could further deepen on Sunday following the humiliating result suffered at the hands of WAFA. The Miners lost 6-1 at Sogakope, a result that led to the exit of stopgap Coach Yussif Mambo.

Finally, on Sunday, Accra Hearts of Oak will be tested by the Leagueâ€™s hottest prospect Victorien Adje Adebayor. The Niger national team regular has scored 11 goals in the league and has lighted up the competition with some amazing displays. Adebayor is fast, skilful and has an admirable conversation rate.

He has tormented many defence and next in line is the backline of Hearts of Oak. Coach Edward Odoom needs to find the right balance to stop Adebayor from causing havoc on Sunday. Inter Allies have had a positive turnaround since the arrival of Coach Henrik Lehm.

Inter Allies have lost just once since he took charge of the team, producing some wonderful away wins against Techiman Eleven Wonders and Berekum Chelsea. Individually, Hearts of Oak look decent to win the game. But that would not come cheap.

The Phobians have Mohammed Alhassan, Sowah Addo, Emmanuel Nettey, Frederick Ansah Botwey, Joseph Esso and six-goal hero Kofi Kordzi in their stables, but their winning rate has not been impressive.

Week 13 gets underway with two fixtures on Friday, March 6 â€“ Karela United vs Asante Kotoko at 3 pm and Legon Cities vs WAFA SC at 7 pm.