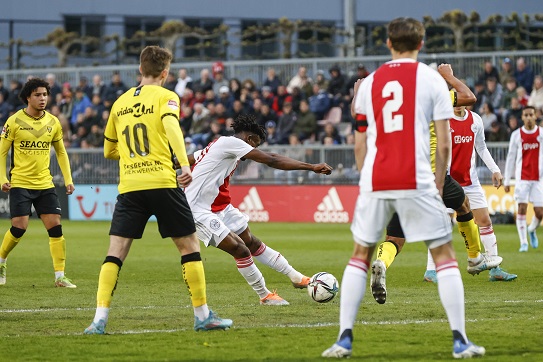 Ghana international Kudus Mohammed registered a goal for Ajax in their 6-1 thrashing of VVV Venlo in the Dutch Eerste Divisie.

The midfielder since regaining full fitness after his long-term injury has become a part of the junior team of Ajax to help him hit top gear.

He started for the youth team of his club when the side hosted VVV Venlo.

In a game where much was expected of him, the Black Stars sensation impressed and netted the opening goal of the match in the 22nd minute to inspire a huge win at the end of the 90 minutes.

Mohammed Ihattaren grabbed a hat-trick as Naci Unuvar also added a brace to contribute to the team’s win.

Kudus has made 12 appearances and scored contributed two goals for the first team.

The 21-year-old has struggled for playing time since returning from a hip injury that kept him out of the first round of the season.

Kudus has won two trophies, and he will be able to add a third as Ajax hold a four-point lead with four games remaining in Dutch top-flight.