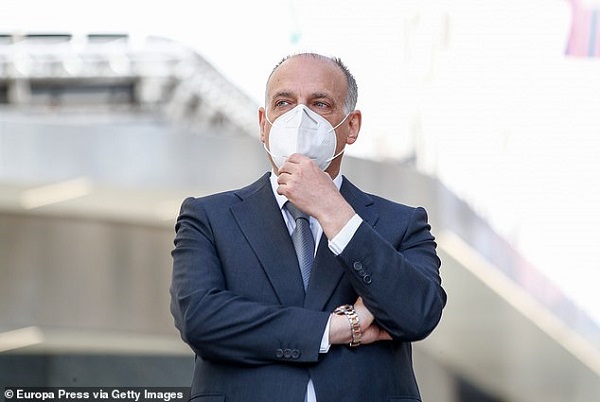 La Liga president Javier Tebas has taken aim at the Court of Arbitration for Sport after they overturned Manchester City's two-year Champions League ban on Monday.

UEFA initially handed City a European ban for breaching Financial Fair Play regulations, but City appealed to CAS and subsequently had the ban taken away.

The decision, revealed at 9:30am on Monday morning, leaves FFP rules in tatters and Tebas was quick to insist that changes need to be made at the top.

Speaking shortly after the announcement, he said: 'We have to reassess whether CAS is the appropriate body to which to appeal institutional decisions in football.

'Switzerland is a country with a great history of arbitration, CAS is not up to standard.'

In the hours after the decision was made, 'RIP FFP' was trending on Twitter as fans suggested UEFA's spending restrictions are 'dead'.

Gary Lineker was also among those giving his thoughts, as he questioned whether UEFA could even continue given the decision made by CAS.

Posting on Twitter, he wrote: 'Hard to see how UEFA's FFP rules can survive this. In fact, can UEFA survive the ramifications?'

CAS is an international, independent, body set up in 1984 that settles disputes relating to sport through arbitration.

Its headquarters are in Lausanne, in Switzerland, and the body have dealt with a number of high-profile cases in recent years, across not only football but the world of sport as a whole.

Sir Mo Farah's former coach Alberto Salazar is currently hoping to overturn anti-doping violations at the Court of Arbitration for Sport, while CAS have also recently dealt with Cardiff and Nantes' row over the £15m transfer of the late Emiliano Sala.

Financial Fair Play rules are a hot topic in football at the moment, not least in Tebas' Spanish top flight with Barcelona.

The Nou Camp giants sold Arthur Melo to Juventus in a big-money move at the end of June, a deal which kept them within FFP restrictions.

They then bought Miralem Pjanic from Juventus shortly after, effectively making it a swap deal between the two clubs.