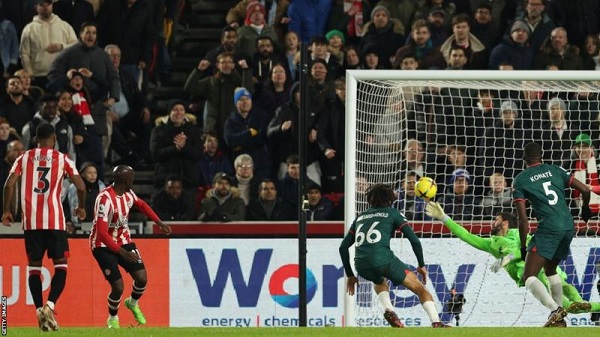 Liverpool missed the chance to reduce the gap to the Premier League's top four as Brentford punished their defensive frailties in a deserved 3-1 victory at the Community Stadium.

In a desperate first half, Liverpool shipped two poor goals amid an inspired performance from the hosts.

The opener came when Ibrahima Konate deflected a corner into his own net after 19 minutes.

Liverpool were unable to deal with Brentford's set-pieces, conceding twice more from corners in the first half only for both goals to be ruled out for offside.

Moments after the second disallowed effort from Yoane Wissa, the Bees striker headed in after Liverpool had sloppily given the ball away.

A triple half-time change from a visibly frustrated Reds' manager Jurgen Klopp, including replacing injured captain Virgil van Dijk, had the desired effect and Liverpool pulled one back through Alex Oxlade-Chamberlain within five minutes of the restart.

At that stage the momentum seemed to be with Liverpool, but Brentford weathered the storm.

With six minutes left, Bryan Mbeumo sealed an impressive success, brushing off Konate in pursuit of a long ball before slotting home.

Brentford are now unbeaten in six games - their best run in the top-flight for more than 80 years - and climb to seventh.

Liverpool, who would have been a point off fourth with a win, stay sixth and two points clear of the Bees.

This was another special night under the lights for Brentford with victory against Liverpool added to vibrant wins over Manchester United and Arsenal since their return to the Premier League.

It was also their first victory over Liverpool since 1938.

But for all of their good work, Liverpool's disorganised, error-strewn defensive performance was notable.

Konate was unfortunate with the first goal which flicked his calf, but that corner came from Mbeumo running clean through on the counter-attack and goalkeeper Alisson having to bail out the defence.

The visitors were all at sea at the two subsequent corners, fortunately surviving on both occasions.

They made one mistake too many seconds later, when Harvey Elliott lost the ball attempting a dummy in his own half which allowed Mathias Jensen to set up Wissa.

Konate should have been stronger too in the closing moments as Mbeumo knocked him off the ball before claiming the deserved third goal. It turned into a sorry night for the Liverpool centre-back on his first appearance since reaching the World Cup final with France.

After winning back-to-back games following the league's restart, this was a disappointing setback for Klopp's side.

They have now dropped 23 points in this campaign - one more than they did all last season.

No Toney, no problem for battling Brentford

The win was even more impressive for Brentford given the fact they were without top scorer Ivan Toney, who was not in the squad after being injured in their 2-0 victory at West Ham on 30 December.

It is only their second Premier League win without the striker since their promotion - and it took a team effort to help them triumph.

In the opening moments Bee Mee crucially cleared a Darwin Nunez effort off the line after the Uruguayan had rounded keeper David Raya.

They rattled Liverpool for the rest of the opening period as they swarmed forward in attack and held firm when the tide seemed to be turning in the second half.

Klopp removed half of his defence - Van Dijk, who had a hamstring injury, and Kostas Tsimikas - and sent on Naby Keita to add thrust in midfield.

At the end, the Bees players and supporters wildly celebrated a win that has left them wondering how far this club can continue to rise.