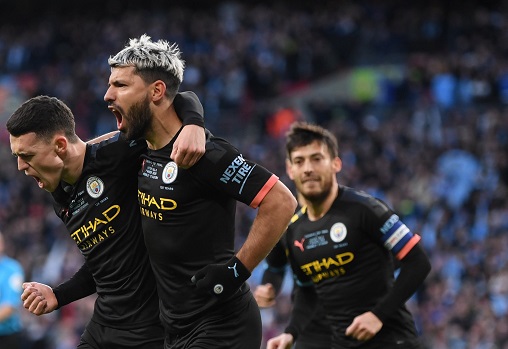 Manchester City secured their third League Cup win in succession - and their fourth in five years - with victory over Aston Villa at Wembley.

Pep Guadiola's side won an historic treble of domestic trophies last season with the Premier League and FA Cup, and they thoroughly deserved their triumph despite a spirited effort from Aston Villa.

Manchester City looked like they would stroll to victory when Sergio Aguero's strike and Rodri's header from a corner that was hotly contested by Villa put them in complete control inside 30 minutes.

Villa, while strictly second best, offered themselves a lifeline when Mbwana Samatta headed in from Anwar El Ghazi's cross four minutes before the interval.

City continued to dominate as they sought a third goal and Villa were agonisingly close to forcing extra time when Bjorn Engels saw his header from a corner turned on to the woodwork superbly by keeper Claudio Bravo.

It was their last chance and City closed out the win their superiority merited.