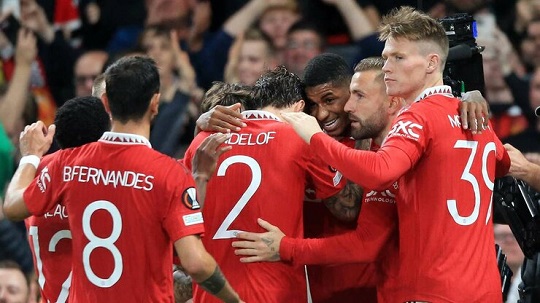 Manchester United secured their place in the UEFA Europa League knockout rounds with a dominant 3-0 home victory over Sheriff Tiraspol.

The Red Devils can still finish top of Group E, but they will need to win away to Real Sociedad by two goals or more to leapfrog their spanish counterparts in the standings next time out.

As expected, Manchester United dominated possession from the off, pouring the pressure on their travelling counterparts. Much to the chagrin of the home crowd however, the United attackers could not find a way to unlock the Sheriff backline in the opening exchanges.

Perhaps the best chance of the first half fell to United talisman Cristiano Ronaldo, but the Portuguese star was somehow denied from a yard out by Maksym Koval in the Sheriff net.

Finally, the hosts were rewarded for their efforts when Diogo Dalot rose above the visitors’ defence to head home from a corner in the dying minutes of the half to give United a deserved lead.

Ronaldo looked to make up for his howling miss on the hour mark when he stabbed the ball home from a Bruno Fernandes cross. However, the goal was ruled out due to offside, seeing United’s advantage remain at one for the time being. The home crowd did not have to wait long to see the game be put to bed though, as Marcus Rashford nodded home a Luke Shaw cross from close range to cap off a superb team move. The final nail was driven into Sheriff’s coffin in the dying minutes when Ronaldo collected his own rebounded shot and tapped home from point-blank range.

After an opening round win in the Group, four straight losses were the downfall for the Moldovan league leaders. However, their defeat at Old Trafford may not come as a surprise to the Sheriff faithful, as no Moldovan team has ever defeated English opposition in European competition.