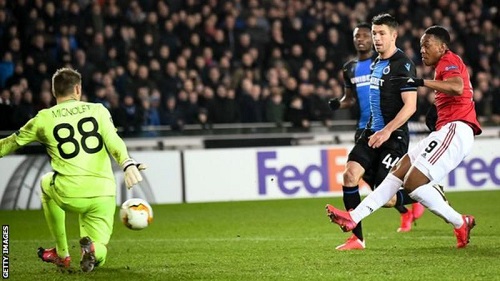 Anthony Martial scored his 14th goal of the season as Manchester United drew 1-1 at Club Brugge in the first leg of their Europa League last-32 tie.

The visitors started poorly and fell behind when Emmanuel Dennis lobbed Sergio Romero early in the first half.

Mignolet tipped a Martial shot onto the post but Odilon Kossounou should have won it for Brugge but bent wide.

January signing Odion Ighalo made his second appearance from the bench in as many games in the closing stages but did not really have an opportunity to show what he could be capable of in a Manchester United shirt.

In the end, the visitors will be the happier of the two sides after securing a potentially crucial away goal despite a largely below-par-performance not helped by the difficult conditions created by persistent heavy rain and a strong wind.

The two sides will meet again at Old Trafford on 27 February.