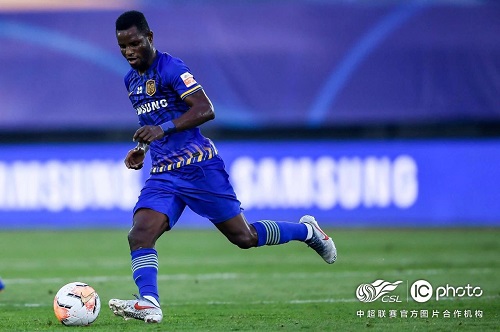 Ghanaian international Mubarak Wakaso made his debut for Jiangsu Suning as they were held to a goalless draw game in the Chinese Super League (CSL) on Friday.

The game was Wakaso's first competitive match since he joined the Nanjing Jiangsu based side.

The midfielder was signed by the Chinese Super League side from Deportivo Alaves during the January transfer window.

But the effect of the COVID-19 pandemic which first emerged in China late 2019 prevented him from travelling to the country to join Jiangsu Suning for the start of the new season.

The 2020 CSL season was slated to begin on February 22 but was forced to be postponed because of the raging COVID-19, commenced on July 25.

READ ALSO: Swansea boss admits Andre Ayew is too good for the Championship

Wakaso on Friday entered the field of play for the first time for Jiangsu Suning as they were held at home in their second game.

He played 83 minutes of action as his outfit were held to a 1-1 stalemate with Shandong Luneng.

Wakaso have lauded his teammates despite in their inability to snatch the win on Friday and is confident of picking up the maximum points in their next game.

Debut with +1 point great performance by the lads another one Tuesday we move 🔵🟡 #positiveenergy #Allahisgreat #WM33 pic.twitter.com/3ZB1jw29c3

The 30-year-old is expected to keep his place in the team when they host Dalian Pro at the Dalian Sports Centre Stadium on Tuesday.