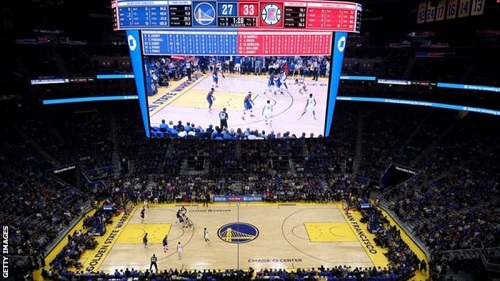 The Golden State Warriors lost to the LA Clippers in their first regular-season game at their new £1bn stadium.

The Clippers surged to a 141-122 victory in San Francisco, with Lou Williams scoring 22 points.

Stephen Curry was the game's leading scorer with 23 points but the Warriors, who lost two-time NBA champion Kevin Durant in July, struggled.

It is the first time the Warriors have played a regular-season game in San Francisco since 1971.

Elsewhere, Vince Carter became the first NBA player to play in 22 seasons when he appeared for the Atlanta Hawks.

The Hawks registered a 117-100 victory over the Detroit Pistons.