Nottingham Forest shock Liverpool in battle of the Reds 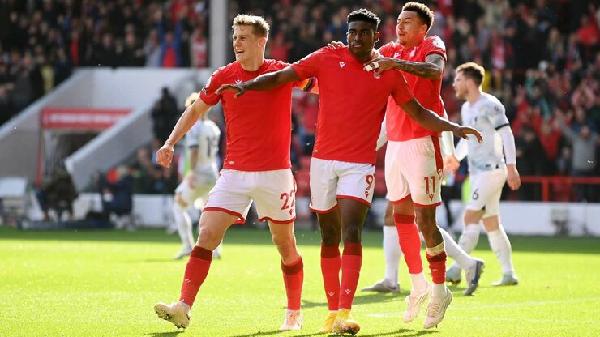 While Forest had early moments of encouragement, they initially struggled to conjure the required quality in attacking areas and Jürgen Klopp’s side offered reminders that they posed a threat. Fábio Carvalho latched onto Harvey Elliott’s inventive pass before being denied by Dean Henderson, with Roberto Firmino heading marginally wide from the ensuing corner. Cheikhou Kouyaté’s eyes lit up when Forest managed to work their first big opportunity, but his attempt was easily saved and Mohamed Salah’s shot was blocked by Scott McKenna moments later.

Taiwo Awoniyi was causing problems for Liverpool’s defence, and he did well to slide through Jesse Lingard whose strike was routinely dealt with by Alisson. Virgil van Dijk then had a golden opportunity from James Milner’s pinpoint cross, but the Dutchman bizarrely attempted to head the ball across to Firmino instead of going for goal himself, epitomising the visitors’ frustrating half. Liverpool’s uncharacteristic wastefulness continued into the second period as Salah made a complete mess of his attempt from Milner’s free-kick delivery.

After robbing Joe Gomez of possession to win a free-kick, Awoniyi got himself into the box to latch onto Steve Cook’s driven cross, hitting the post with his first attempt and finishing the second - scoring the opener against his former club having played just 12 minutes across the previous three matches. The striker would have swiftly added an assist too, if Milner hadn’t flown across to block Morgan Gibbs-White’s shot. In the 62nd minute, Klopp made a double-change that almost paid immediate dividends as Trent Alexander-Arnold delivered a peach of a cross that Firmino couldn’t head on target.

However, Liverpool simply couldn’t find a way through with Henderson denying Alexander-Arnold, Van Dijk and Salah late on as Forest ended their nine-game winless run after earning back-to-back clean sheets for the first time this season. Meanwhile, Liverpool have gone winless after five PL away matches for the first time since 2006/07, having failed to score on their travels in the league for just the third time in 34 outings.