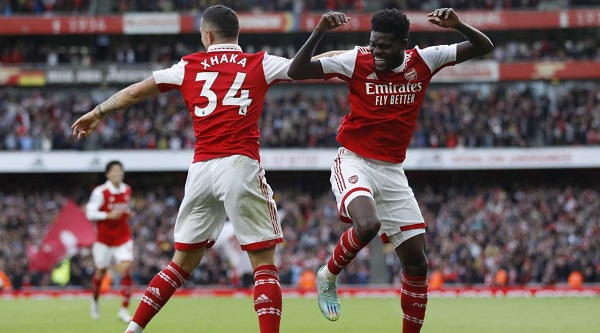 The Ghanaian who dominated the midfield battle, scored a blinder in the second half as the Gunners beat the visitors 5-0 at Emirates.

He bend a shot straight into the top right corner in the 57th minute after receiving a pass from Reiss Nelson.

Mikel Arteta's side dominated from minute one and took an early lead when Bukayo Saka's cross was headed in by Gabriel Martinelli.

But Saka was forced off with a suspected ankle injury on the half hour mark and was replaced by Nelson.

The Gunners will feel they should have gone in at the break with a bigger lead with Gabriel Jesus spurning two opportunities and Martinelli having a shot cleared off the line.

And they were more clinical in the second half and increased their lead when Nelson smashed home the rebound after his first shot was parried by Dean Henderson for his first goal in two years.

And three minutes later, Nelson grabbed his second with a cushioned volley at the near post from Jesus's cross.

Steve Cooper made two attacking subs, bringing on Bradley Johnson and Emmanuel Dennis, but the one-way traffic continued with Nelson teeing up the impressive Thomas Partey who rifled a first-time shot from distance in the top corner to make it 4-0.

And captain Martin Odegaard completed the rout with a ferocious strike in the box which flew into the top corner for a resounding win which puts Arsenal two points clear of second place Manchester City.