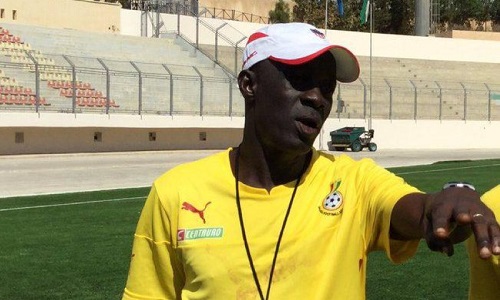 In this edition of our profiling, the focus is on Ben Fokuo, Head Coach of Ghanaâ€™s Under-17s, Black Starlets. He is a former international who now Coaches Division One side Kpando Heart of Lions.

Ben Fokuo hails from Banda Ahenkro but was born in Chiraa, Bono Ahafo on 2nd September, 1962. He had his early childhood and college education at Urban Council middle school Chiraa.

As an offensive midfielder and nicknamed Falcao, he began his football career at Bofoakwa Tano FC in 1980. He spent two years with â€œBofoâ€ and moved to city rivals B/A United FC in 1982 in a controversial cross-city transfer before swapping Sunyani for Accra in 1984 to join Accra Great Olympics.

Ben Fokuo featured for the Black Stars competitively for one year, 1984-85. With time, he struggled to command regular playing time due to competition for places in the team. He then moved to Ghapoha Football Club, Tema in 1990 and played for the Harbour Warriors for a period of six years, his longest stint with a Club side and retired in 1997.

In the area of coaching, he had the opportunity to participate in various coaching courses and holds the following certifications:

Ben Fokuo was one of the four young coaches sponsored by the Ghana Football Association to Germany for the UEFA Licence â€œAâ€ and â€œBâ€ Coaching Courses to spearhead Ghanaâ€™s 5-year football development plan under the leadership of the late Ben Koufie and came out successfully. He, together with other coaches, scouted and formed the first female national team in Ghana.

2007 â€“ Qualification to All Africa Games (Womenâ€™s team) in Algeria as Assistant Coach.