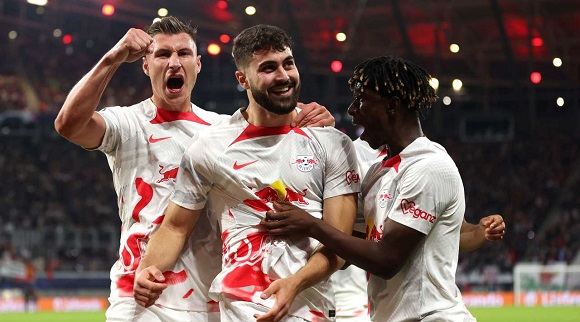 Timo Werner was amongst the goals as RB Leipzig sealed a famous 3-2 victory over reigning champions Real Madrid at the Red Bull Arena – a result that puts them on the brink of progressing to the knockout stages.

With qualification already secured and needing just a draw to guarantee top spot, a shellshocked Los Blancos found themselves two goals down inside 18 minutes.

Their defence switched off as Dominik Szoboszlai whipped in a corner, picking out Andre Silva whose bullet header was kept out by Thibaut Courtois. But he could only palm it into the path of Josko Gvardiol who had an empty net to head into.

It got even better for Leipzig five minutes later when, after Real Madrid failed to clear their lines from another corner, a deflected shot fell kindly to Christopher Nkunku and his rifled shot crashed in off the crossbar for his seventh goal in as many games.

The visitors halved the deficit on the stroke of half-time courtesy of a magical moment from Vinicius Junior. Marco Asensio sprinted to the by-line, pulled a cross back to the Brazilian who beautifully guided a sublime header past Janis Blaswich.
That inspired Carlo Ancelotti’s side as they piled on the pressure after the restart. But they were always susceptible to the counterattack and Leipzig almost put the game to bed when substitute Timo Werner’s shot drifted agonisingly wide of the far post.

The usually ruthless Vinicius Junior spurned a gilt-edged chance from point-blank range before Werner finally put the game to bed, slotting into an empty net after receiving a pinpoint cross from Mohamed Simakan. A late penalty from Rodrygo was just a consolation.