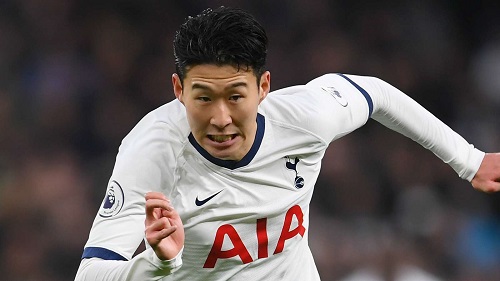 Son Heung-min will complete his four-week mandatory military service inÂ South KoreaÂ while the Premier League is suspended due to the coronavirus outbreak,Â TottenhamÂ have confirmed.

The international forward will begin his service later this month having been allowed by Spurs to return to Korea in March.

Usually, all able-bodied South Korean men under 28 years of age are expected to complete a 21-month military service, however Son was exempted from this after he captained his country to a gold medal in the football tournament at the 2018 Asian Games.

He was scheduled to complete a shortened service this summer, but this has been brought forward following the suspension of the English top flight.

A Spurs statement said club officials are in touch with the player, who is also recovering from a fractured arm suffered in the last Premier League game he played in before coronavirus brought football worldwide to a halt.

It read: "The club can confirm that Son Heung-min will commence his mandatory military service in South Korea this month.

"The forward arrived back in his home country at the end of March where he is currently in quarantine. Our medical staff are in regular contact as he concludes his recovery after fracturing his arm in our 3-2 win againstÂ Aston VillaÂ on February 16 and continues to train.

"Sonny had surgery on his arm in South Korea before returning to the UK at the end of February to continue his rehabilitation, prior to the initial announcement of the professional game inÂ EnglandÂ being suspended as a result of the Covid-19 pandemic.

"The Premier League has since announced that the 2019/20 season will only return when it is â€˜safe and appropriate to do soâ€™ and is under constant review.

"Son will return to London following the conclusion of his military service in May."

Son was not expected to return from injury this season, but all English football has since been suspended.

Along with formerÂ Manchester UnitedÂ midfielder Park Ji-sung,Â Spurs attacker Son has been helping those affected by Covid-19 in their homeland, with each donating Â£65,000 to victims of the illness.

The pair have each made sizeable donations, with Park donating to Childfund Korea and Son to Good Neighbours International, the humanitarian group currently on the frontlines of the crisis in Asia.