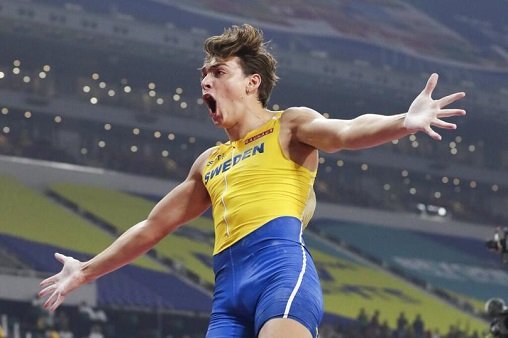 Armand Duplantis broke his own pole vault world record by clearing 6.18m at the Indoor Grand Prix in Glasgow on Saturday.

The USA-born Swede, 20,Â had only beaten the previous markÂ of 6.16m a week earlier when he cleared 6.17m in Poland.

"The Olympics is the biggest thing an athlete can compete in and that is when I want to be at my best."

He was born in the United States but chose to represent his mother's native country of Sweden.

Duplantis, who goes by the nickname Mondo, is coached by American father Greg, who was also a pole vaulter, while mother Helena is a former heptathlete and volleyball player.

The 21-year-old Scot, who recently broke threeÂ British indoor records in a week, won in a time of four minutes 4.07 seconds.

"A few points I had to get my elbows out," she said.

"That's middle-distance running for you. I am just learning so getting the confidence that I can do that was good.

"I was hoping I was going to beat my own British record but it's OK, I will take the win."

Fellow ScotÂ Laura MuirÂ won the 1,000m but missed out on a new world indoor record for the distance.

Muir was aiming to beat the mark of two minutes 30.94 seconds held by Maria Mutola but finished in 2:33.47.

"I would have liked to have got close to the world record but world records are not easy, you have got to work hard for it," said Muir.

"I tried to push as best I can and I was a little bit off, but I gave it a good shot."