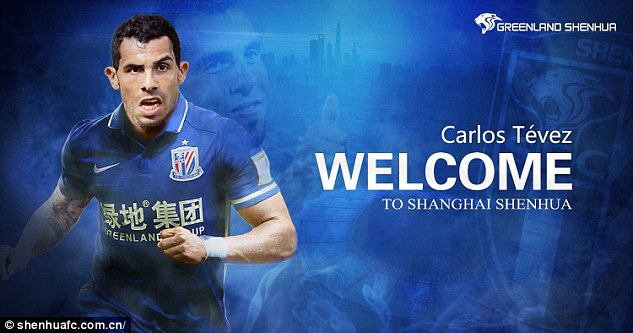 Carlos Tevez has finalised his move to Shanghai Shenhua where he becomes the highest-paid footballer in the world, earning an estimated £615,000 per week.

The former West Ham, Manchester United and Manchester City striker is the latest star to head for the riches of the Chinese Super League, leaving his boyhood side Boca Juniors.

Tevez, 32, will have a medical before meeting up with his team-mates having agreed his mammoth personal terms.

He will work under former Chelsea and Tottenham midfielder Gustavo Poyet, who took over as Shenhua manager last month.

Boca Juniors wished Tevez their best wishes in a statement announcing his departure, which included the message: 'Good luck Carlitos. You will always be in our hearts.'

The striker, who returned to his boyhood side in the summer of last year, scored 25 goals in 56 matches in his second spell at Boca, winning Argentina's Primera Division and the Copa Argentina

His new salary marks a huge increase from the relatively-modest wages he was earning in Buenos Aires.

They finished fourth in the Chinese Super League in 2016. Mail Online