The boos were for me, not Jordan Ayew - Otto Addo 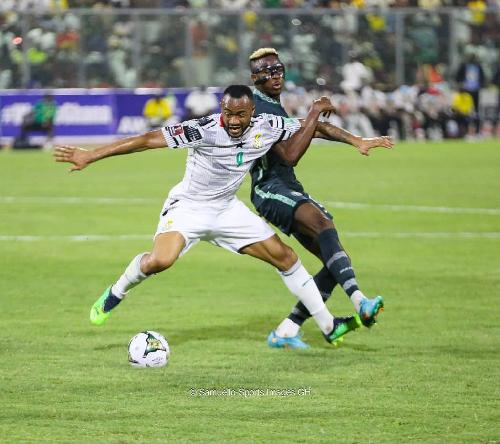 Black Stars coach Otto Addo has jumped to the defence of striker Jordan Ayew following his performances in the stalemate against Nigeria.

Jordan Ayew was booed off the pitch by fans of the Black Stars at the Baba Yara Stadium on Friday night in the first leg of the 2022 FIFA World Cup qualifier.

When questioned on what he felt about the jeers towards Ayew, Otto Addo said the boos were rather aimed at him not the Crystal Palace forward.

According to him, the 30-year had a good game.

“I think the boos were for me because I think Jordan played we’ll, especially in the first half. Defensively he was solid and at the end maybe the fans did not see but he was tired,"

Jordan Ayew has scored 18 goals for the national team but has not found the net for the Stars in a year, since he scored against Sao Tome and Principe in 2021.

There were some calls for him to be dropped from the squad after an underwhelming AFCON campaign but new head coach, Otto Addo kept faith in the Crystal Palace forward.

Not only did he call him up despite Jordan recently testing positive for COVID-19, the striker started the first leg of the 2022 World Cup Qualifier against Nigeria at the Baba Yara stadium.

Ghana and Nigeria have it all to play for in the second leg on Tuesday at the Mashood Abiola Stadium in Abuja where Nigeria will have the home advantage.