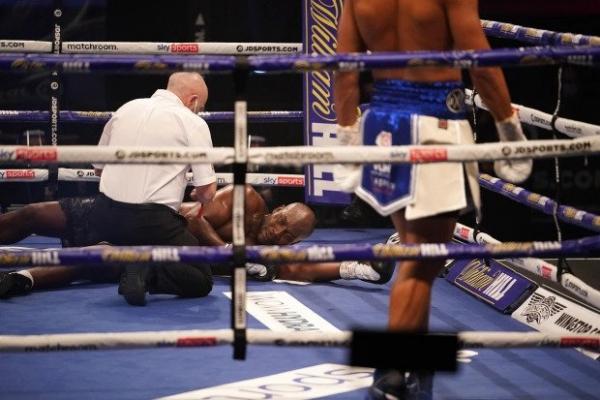 The Dillian Whyte-managed monster was in a big step-up fight, but less than two rounds to destroy his opponent with a walk-off, one-punch knockout, The Sun reports.

In the opening session, Lartey marched forward with a high guard and even clipped the Ipswich man with a left hook.

But in the second round Lartey switched off and former office worker Wardley unloaded a two-shot combination.

Lartey collapsed on the spot and was counted out before the medics were called in to help him.

Lartey was stuck on the floor for a few minutes before he could be lifted carefully to a stool where he spent several more minutes recovering.

Concerned Wardley stayed rooted to a neutral corner and, just as Lartey was helped out of the ring, the Brit dashed over to hug and console him.

Dangerous Wardley is now 10-0 with nine wins inside the distance and has the English title proudly around his waist.

Wardley said: “I’m happy with the finish. It answered some questions about my single-punch power.

“I can hang with the big boys. I just proved that when I sit down on my punch, I can get you out.

“I’m moving at a good pace. Decent opposition. Lartey was a good challenge that I passed easily.

“I still need to build and learn. I haven’t gone to the second half of a fight or got into a war.”