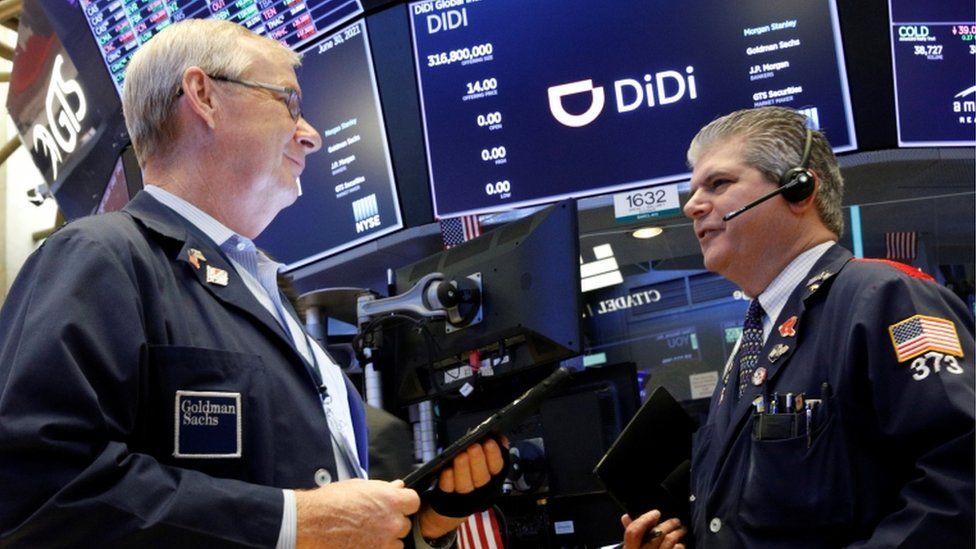 Chinese ride-hailing giant Didi Global has announced plans to take its shares off the New York Stock Exchange (NYSE) and move its listing to Hong Kong.

The firm has come under intense pressure since its US debut in July.

Earlier on Thursday the US market watchdog unveiled tough new rules for Chinese firms that list in America.

"Following careful research, the company will immediately start delisting on the New York stock exchange and start preparations for listing in Hong Kong," the company said on its account on Weibo, China's Twitter-like microblogging network.

In a separate English language statement Didi said its board had approved the move, adding: "The company will organise a shareholders meeting to vote on the above matter at an appropriate time in the future, following necessary procedures."

However, trading was muted on the first day as investors weighed concerns over tensions between Washington and Beijing, and issues raised by US regulators over some Chinese firms' financial reports.

The Cyberspace Administration of China (CAC) said it was investigating the firm to protect "national security and the public interest".

In response Didi said in a statement: "The company will strive to rectify any problems, improve its risk prevention awareness and technological capabilities, protect users' privacy and data security, and continue to provide secure and convenient services to its users."

Didi also warned that the removal of its app from Chinese stores would have an adverse impact on its revenues.

Like many other Chinese technology companies Didi has also come under pressure from regulators in the US and Europe.

On Thursday, the US Securities and Exchange Commission said it had finalised rules that would mean US-listed foreign companies can be delisted if their auditors do not comply with requests for information from regulators.

The law was passed in 2020 after Chinese regulators repeatedly denied requests from US authorities to inspect the the accounts of Chinese firms that list and trade in the US.

Meanwhile in August, a company source told the BBC that it had halted plans to launch in the UK and continental Europe.

It had been planning to roll out services in Western Europe, including major British cities.

Japan's SoftBank is Didi's largest single investor with a stake of more than 20%. It is also backed by Chinese technology giants Alibaba and Tencent.

Uber also owns a stake in the firm as a result of Didi taking over Uber China in 2016.

Didi Global shares have lost more than 40% of their value since their US market debut.

2px presentational grey line
Analysis box by Mariko Oi, Aisa correspondent
From Alibaba to Tencent, Chinese technology companies have been under scrutiny at home and abroad.

The country's ride-hailing giant Didi has been at odds with Chinese regulators for months.

It shocked investors when Beijing removed Didi from app stores just a few days after the firm went public on Wall Street in late June, accusing it of violating data security rule.

Beijing has also announced rules to protect the rights of the millions of ride-hailing drivers, in a move aimed to underpin the sector's growth.

But Chinese companies have also been closely watched by American regulators.

Didi said it is preparing to list in Hong Kong, and shareholders of its US listed shares will be able to convert their holdings to those on another stock exchange.

The company is also preparing to relaunch its apps in China by the end of the year.