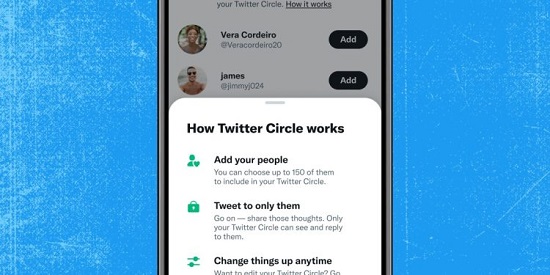 Twitter has rolled out its Circle feature which allows users to Tweet to a smaller crowd globally.

With Twitter Circle, people now have the flexibility to choose who can see and engage with their content on a Tweet-by-Tweet basis. This makes it easier to have more intimate conversations and build closer connections with select followers.

According to Twitter, “We began testing Twitter Circle in May, and the response was overwhelmingly positive. So starting today, we’re making this highly-requested feature available to everyone on iOS, Android, and Twitter.com globally.”

add up to 150 people to yours and use it. please. pic.twitter.com/D6AE4OhRX5

Before you post on Twitter, you’ll now see an option to share your Tweet with either your circle or your full followers list. Circles can contain up to 150 people, and you can adjust who’s in and who’s out at any time. Don’t worry, no one will be notified of any changes you make to your circle.

Tweets sent to your circle will appear with a green badge underneath them. They can only be seen by those you’ve selected to be in your circle and cannot be Retweeted or shared.