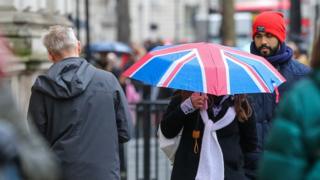 The British economy will grow at the slowest pace since the financial crisis this year, according to the government's spending watchdog.

The Office for Budget Responsibility (OBR) cut its 2020 growth forecast to 1.1%.

This would be the weakest performance since 2009 and does not take into account any hit from the coronavirus.

It came as the chancellor unveiled a Â£30bn package to help the economy cope with the outbreak.

A year ago, the OBR predicted the UK economy would grow by 1.4% this year.

However, the forecasts were made before the extent of the coronavirus outbreak in the UK became clear.

They do not take into account the emergency government stimulus measures or the cut in UK interest rates announced earlier on Wednesday.

There are currently 382 cases of the virus in the UK, and this number is growing.

Mr Sunak unveiled Â£7bn of emergency funding to help people deal with the virus, alongside at least an extra Â£5bn for the NHS.

He said the outbreak would have a "significant impact" on the economy.

But he also said extra spending and investment would provide "security today" and "prosperity tomorrow".

It came as the chancellor unveiled a three-point plan to tackle the coronavirus, including:

Providing the NHS with unlimited financial resources to fight the virus

Extending sick pay benefits to healthy people forced to self-isolate as well as the UK's five million self-employed
Pledging to foot the sick pay bill for any business employing less than 250 people for up to 14 days, and scrapping business rates for small firms.

Mr Sunak warned that the coronavirus would hit spending and trigger a temporary disruption to the economy.

He warned that a fifth of Britain's workforce could be off work at any one time.

The extra cash for the NHS, families and businesses comes on top of an extra Â£18bn earmarked by the chancellor to boost the economy.

Mr Sunak said the government would do "everything we can to keep this country and our people healthy and financially secure".