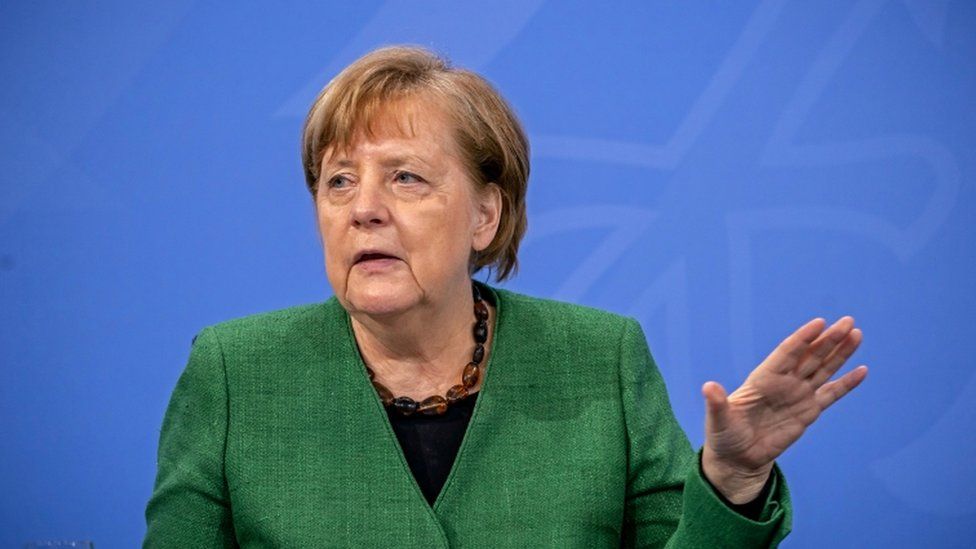 Germany has extended its lockdown for three weeks, imposing an almost complete halt over the Easter holiday in response to a third wave of coronavirus infections.

Restrictions will be even tougher from 1-5 April, when most shops will be shut and gatherings will be limited.

"Case numbers are rising exponentially and intensive care beds are filling up again," the chancellor told a news conference on Tuesday.

Coronavirus infections have been surging across Europe in recent weeks as countries scramble to vaccinate their populations despite delays in rolling out jabs.

In neighbouring Poland, the rate is more than three times higher. French hospitals have admitted another 471 patients into intensive care in 24 hours, and another 15,792 cases have been reported.

Announcing the new restrictions after marathon crisis talks with the leaders of Germany's 16 states, Mrs Merkel said the highly contagious UK (Kent) variant of coronavirus had become dominant in Germany, plunging the country into what she called "a new pandemic".

"Essentially, we have a new virus," the German chancellor said. "It is much deadlier, much more infectious and infectious for much longer. " Germany was in a race against time to roll out vaccinations against the coronavirus, she added

Tuesday's lockdown extension marks a reversal from earlier this month, when state leaders agreed to begin a cautious reopening process.

What are the new measures?
Existing measures, such as the closure of sporting facilities, will remain in place until 18 April.

Then, for five days over Easter from 1 April, Germans are being asked to stay at home and reduce contacts:

In-person religious services are cancelled
Big family gatherings are banned, with no more than two households, or up to five people, allowed to meet
All shops are shut, apart from food shops on Saturday 3 April.
An "emergency brake" will halt further re-openings in areas where infections exceed 100 new cases per 100,000 people over a seven-day period.

Alarm in Poland
Poles cannot now enter Germany unless they have tested negative for Covid-19 within the past 48 hours. Thousands of Poles commute daily to Germany for work.

Poland is one of the hardest-hit EU countries in the current third coronavirus wave - it reported 14,578 new cases on Monday, which is 34% higher than a week ago. Health officials say the highly contagious British variant accounts for 80% of the new cases.

Part of the reason for that is supply problems with the Oxford/AstraZeneca vaccine - now at the centre of political tensions between the UK and EU over the firm's contractual obligations.

The EU is now considering an export ban targeting AstraZeneca production in Europe. EU officials complain that too much of the vaccine is going to the UK and other countries, rather than staying in the EU.

Meanwhile, Hungary has become the first EU country to approve use of China's CanSino Biologics coronavirus vaccine and CoviShield, the Indian version of the AstraZeneca vaccine, Reuters news agency reports.

EU states are allowed to strike separate deals with vaccine makers which have not signed agreements with the EU. Hungary is already using China's Sinopharm vaccine and the Russian Sputnik vaccine.

The EU regulator, the European Medicines Agency, has so far approved four vaccines - from Pfizer-BioNTech, Moderna, Johnson & Johnson and AstraZeneca.