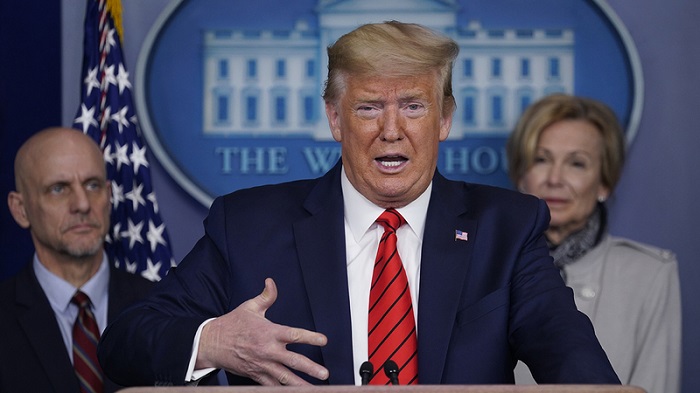 US President Donald Trump has again defended the use of hydroxychloroquine to ward off coronavirus, contradicting his own public health officials.

He said the malaria medication was only rejected as a Covid-19 treatment because he had recommended its use.

His remarks come after Twitter banned his eldest son for posting a clip promoting hydroxychloroquine.

There is no evidence the drug can fight the virus, and regulators warn it may cause heart problems.

Last month, the US Food and Drug Administration (FDA) cautioned against the use of the drug for treatment of the coronavirus, following reports of "serious heart rhythm problems" and other health issues.

The FDA also revoked its emergency-use authorisation for the drug to treat Covid-19. The World Health Organization (WHO) says "there is currently no proof" that it is effective as a treatment or prevents Covid-19.

Coronavirus deaths in the US hit their highest level in months, with nearly 1,600 deaths recorded in 24 hours. Six states in the south and west, including Florida and California, reported record daily death tolls. But Mr Trump claimed that large parts of the US were "corona-free"

The US biotech company Moderna said its experimental coronavirus vaccine had induced a strong immune response in a study on monkeys. It said the vaccine protected against infection in the lungs and nose and prevented lung disease

Better known for making cameras, Kodak has moved into drug making and has just secured a $765m (£592m) loan from the US government. The fallen giant of the photography industry will make ingredients used in generic drugs to help fight the virus

What did Mr Trump say?
Studies commissioned by the WHO, the US National Institutes of Health and other researchers around the world have found no evidence that hydroxychloroquine - when used with or without the antibiotic azithromycin, as repeatedly recommended by President Trump - helps treat coronavirus.

Hydroxychloroquine was first touted by Mr Trump in March. Two months later he surprised journalists by saying he had begun taking the unproven medication to ward off the virus.

On Tuesday the president told reporters at the White House: "I can only say that from my standpoint, and based on a lot of reading and a lot of knowledge about it, I think it could have a very positive impact in the early stages.

"I don't think you lose anything by doing it, other than politically it doesn't seem too popular."

He added: "When I recommend something, they like to say 'don't use it.'"

On the wider situation in the US, the president said large numbers of masks and gowns were being produced and 55 million tests had been carried out - "more than anybody in the world".

Why has hydroxychloroquine come up again?
President Trump and his son Donald Trump Jr were among social media users who shared video late on Monday of a group called America's Frontline Doctors advocating hydroxychloroquine as a Covid-19 treatment.

Twitter also banned the US president's eldest son from tweeting for 12 hours as a penalty for sharing the clip. In the past, Twitter has declined to remove tweets by President Trump himself and other world leaders, citing public interest and newsworthiness.

The video in question showed doctors speaking outside the US Supreme Court building at an event organised by Tea Party Patriots Action, a group that has helped fund a pro-Trump political action committee.

In the video, Dr Stella Immanuel, a doctor from Houston, says she has successfully treated 350 coronavirus patients "and counting" with hydroxychloroquine.

The president said on Tuesday: "I think they're very respected doctors. There was a woman who was spectacular in her statements about it."

According to the Daily Beast, Dr Immanuel has previously claimed the government is run by "reptilians" and that scientists are developing a vaccine to stop people being religious, among other bizarre views.

"Treatment options for COVID-19 should be debated, and spoken about among our colleagues in the medical field," she tweeted. "They should never, however, be censored and silenced."

But in Tuesday's briefing the president denied he was criticising the director of the National Institute of Allergy and Infectious Diseases, insisting: "I get along with him very well."

Asked about hydroxychloroquine earlier on Tuesday, Dr Fauci said the medication was not an appropriate treatment for Covid-19.

He told ABC News' morning show that the drug was "not effective in coronavirus disease".

At Tuesday's briefing, Mr Trump questioned why the White House coronavirus expert and his fellow task-force member Dr Deborah Birx were popular, but his administration was not.

He said: "They're highly thought of but nobody likes me. It can only be my personality, that's all."