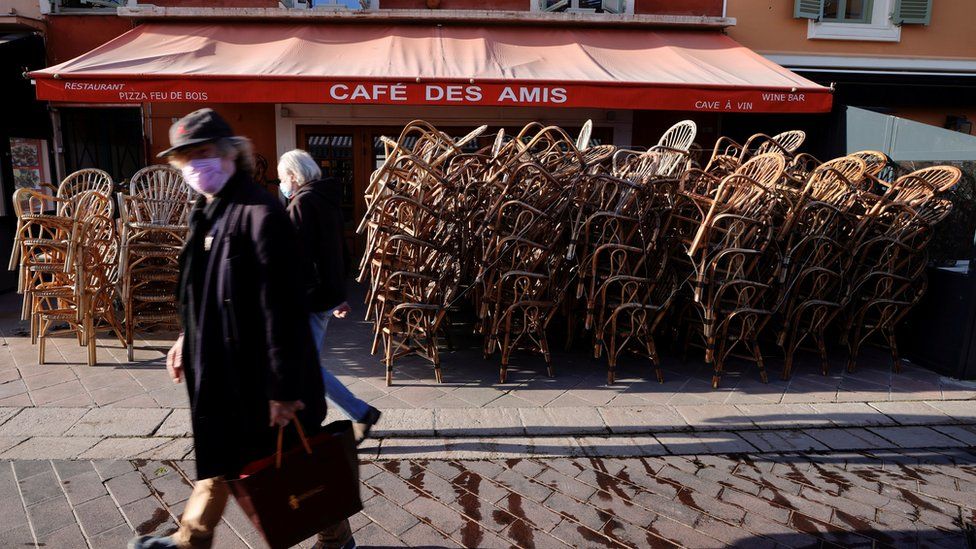 Non-essential shops and restaurants will be shut
Shares

President Macron had hoped to keep France's coronavirus cases under control without having to impose another lockdown.

However, the country has struggled with an EU-wide delay in the vaccine rollout, as well as several new strains of the virus.

What about the rest of Europe?
In Germany, President Frank-Walter Steinmeier called on people to play their part and get vaccinated.

Speaking in a television address to the nation on Saturday, he said the country was in the middle of a third wave and that it faced more restrictions.

He also admitted that mistakes had been made - specifically in testing and in the vaccine rollout - and talked about there being a "crisis of trust" in the state.

"Of course, there is no single silver bullet to get out of the pandemic," President Steinmeier said. "And that is why political dispute is needed - but the arguing must not become an end in itself.

"Whether it's about a federal or state level, party or coalition, or whether opinion polls are up or down - none of that can play the main role now.

"We need clarity and determination, we need understandable and pragmatic regulations so that people have direction, so that this country can again achieve what it has within."

Last month, German officials announced that the country would be placed in a strict Easter lockdown - only to reverse the decision just days later.

German Chancellor Angela Merkel called the plan for a lockdown from 1 to 5 April a "mistake", and said she took "ultimate responsibility" for the U-turn.

Italy also entered a strict three-day lockdown on Saturday in order to try to prevent a surge in Covid-19 cases over the Easter weekend.

All regions are now in the "red zone" - the highest tier of restrictions - as the country records about 20,000 new cases a day.

Non-essential movement is banned, but people are allowed to have an Easter meal in their homes with two others. Churches are also open, but worshippers are being told to attend services within their regions.

On Sunday, for the second year, Pope Francis will deliver his Easter message to an empty St Peter's Square.

Different regions will then remain in either "orange zone" or "red zone" restrictions until the end of the month.

The Italian government also announced it was placing 70,000 extra police officers on surveillance nationwide, in order to enforce the lockdown rules.

"This is not the time to lower our guard, and to let go of that sense of responsibility shown so far," Interior Minister Luciana Lamorgese told the newspaper Il Messaggero. "Because the progress recorded by the campaign for vaccines finally gives a glimpse of a different horizon that will allow us to gradually return to normal."

What's happening with vaccinations in Europe?
On Friday, the World Health Organization (WHO) criticised Europe's "unacceptably slow" vaccine rollout, and said the situation in the region is now worse than it has been for several months.

"Vaccines present our best way out of this pandemic... However, the rollout of these vaccines is unacceptably slow," WHO director for Europe Hans Kluge said in a statement.

"We must speed up the process by ramping up manufacturing, reducing barriers to administering vaccines, and using every single vial we have in stock, now."

In the meantime, as long as vaccine coverage remained low, he said EU countries would have to impose lockdowns and other measures to compensate for the delays.

According to the WHO, only 10% of the nearly 900 million people in the region have had a single dose of coronavirus vaccine.