Ex-SA convict becomes mayor and gives up his salary 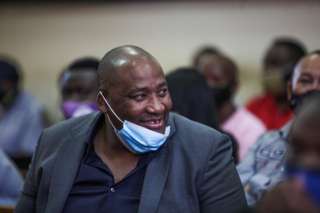 A former convict who was recently appointed as mayor of a South African municipality has pledged to give up his salary and other trappings of the office.

In his inauguration speech, Gayton McKenzie of the Patriotic Alliance (PA) party said nothing from Central Karoo district would be spent on him during his tenure.

This includes not having a mayoral vehicle and bodyguards.

He used his funds to pay for the food eaten at his inauguration, local media outlets report.

Mr McKenzie confirmed his pledge with a tweet on Tuesday, that added that "taxpayers looked after me in jail, I'm free now".

Mr McKenzie promised to intensify the fight against illegal immigration.

He served seven years of a 15-year sentence for armed robbery after being arrested in 1996. He was released from prison in 2003.