Kwasi Kwarteng says he got carried away as chancellor 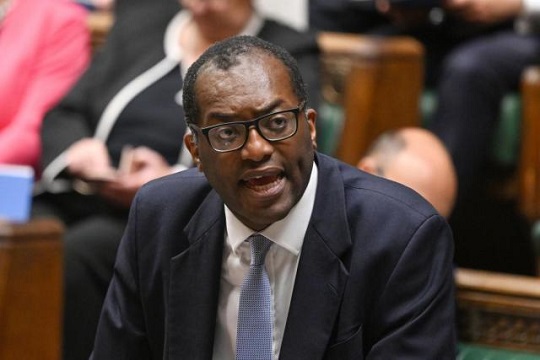 Former chancellor Kwasi Kwarteng says he "got carried away" when he announced a huge package of ill-fated tax cuts alongside former PM Liz Truss.

Mr Kwarteng told the Financial Times his biggest regret was being "too impatient" with the mini-budget.

The plans sparked turmoil in the markets, eventually leading to Mr Kwarteng and Ms Truss's resignation.

"There was a brief moment and the people in charge, myself included, blew it," he said.

Reflecting on his time in office, the MP for Spelthorne said there had been "no tactical subtlety whatsoever".

"People got carried away, myself included," he said.

As chancellor, Mr Kwarteng set out a package to abolish the top rate of income tax for the highest earners, axe the cap on bankers' bonuses, and provide an expensive and long-running energy support package.

The plans would have required more than £70bn of increased borrowing, but most of the measures were torn up by his successor, Jeremy Hunt.

The pound fell to a record low against the dollar after the announcement, requiring intervention from the Bank of England and increasing mortgage rates for homeowners.

He was sacked from the position after just 38 days, becoming Britain's second shortest-serving chancellor, with Ms Truss's time as prime minister coming to a chaotic end shortly afterwards.

Mr Kwarteng, who is a long-time ally of Ms Truss, previously said he told her it was "mad" to sack him, saying he urged her to "slow down".

His comments come after Ms Truss's former chief speech writer, Asa Bennett, said she took a "Spinal Tap approach" to government and demanded the volume "was turned up to 11".

Spinal Tap are a spoof heavy metal group created by a team of comedians and musicians, who famously had amplifiers that were "one louder" than 10.

Mr Bennett said the former prime minister was determined to put "rocket boosters" under the economy when she arrived in Downing Street.