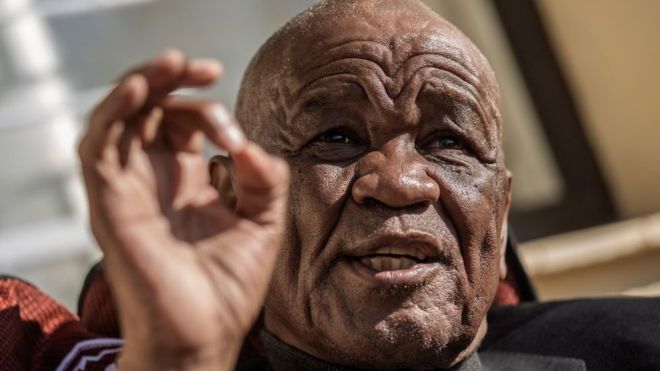 Lesotho's Prime Minister Thomas Thabane has failed to appear in court to face charges of murdering his estranged wife in 2017.

His current wife Maesaiah Thabane has already been charged with the murder.

Mr Thabane would be the first African leader to be charged with a domestic murder while in office, in a case that has shocked the tiny mountain kingdom.

He has not commented on the allegations.

Police on Thursday said he would be charged with murder in court on Friday. He was expected in court at 09:00 local time (07:00 GMT), reports the Reuters news agency.

"He is not attending court, he has gone for a medical check up in South Africa," his personal secretary Thabo Thakalekoala told news agency AFP, adding that it was a "routine" medical check.

Mr Thabane said on state radio on Thursday that he had served the nation "diligently" and he would retire at the end of July.

"I've worked for a peaceful and stable Lesotho. Today... at my age, I have lost most of my energy," he was quoted as saying.

He did not mention the allegations against him.

The ruling All Basotho Convention had given him a deadline of Thursday to resign.

How did the murder take place?

Lipolelo was gunned down at close range on the side of a dirt road while returning to her home in a small village on the outskirts of the capital, Maseru.

She was involved in bitter divorce proceedings with Mr Thabane when she was killed.

At the time, the prime minister was living with Maesaiah, 42, as if she were his wife.

But Lipolelo had already won a separate legal battle to be recognised as First Lady, rather than Maesaiah.

Two months later she and Mr Thabane got married in a Catholic ceremony held at a packed stadium in Maseru.

She has also been charged with the attempted murder of a family friend Thato Sibolla, who was with Lipolelo at the time of the shooting and is expected to be a key witness in the murder case.

Maesaiah has not yet been asked to enter a plea.