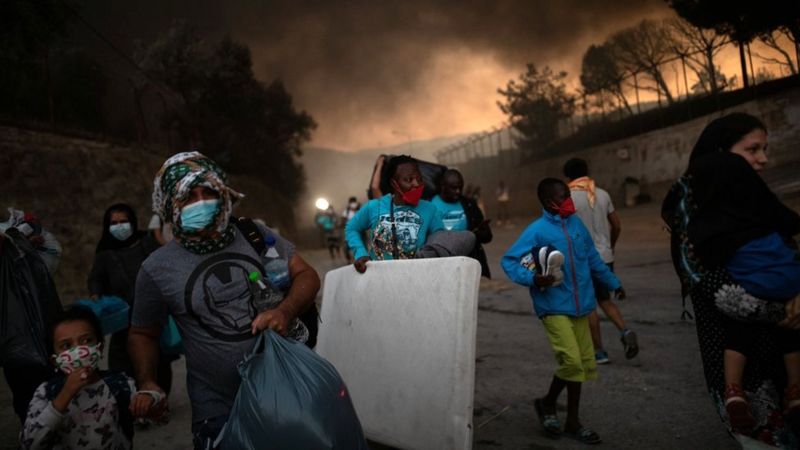 Greece is sending three ships to help house thousands of migrants sleeping rough on the island of Lesbos after fire destroyed their overcrowded camp.

For a second night families slept on roads, and in fields and car parks after fleeing Moria camp, where about 13,000 had been living in squalor.

A blaze engulfed Moria camp on Tuesday night, then another wiped out any remaining tents on Wednesday.
About 400 teenagers and children have been flown to mainland Greece.

The Greek authorities say a ferry is on its way to provide shelter, along with two naval vessels. Migration Minister Notis Mitarachi said about 2,000 people would be temporarily sheltered aboard the ships.
But he also said authorities were working to provide emergency accommodation near the devastated Moria camp site.
Mr Mitarachi said tensions had been running high in the camp because a 15-day quarantine had been imposed after a migrant tested positive for coronavirus last week.
By Wednesday, 35 people linked to the camp had tested positive for coronavirus, and there is concern on Lesbos now that most of them need to be urgently located.
Caroline Willeman, the Moria co-ordinator for medical charity Médecins Sans Frontières (MSF), told the BBC that "they had initially been isolated, but of course in the chaos of the last two days they have once again been dispersed within the wider community".
"We had been told last night that eight out of the 35 cases had again been located and isolated."
line
Migrant families left with nothing
Bethany Bell, BBC News, Lesbos
Along the road from the burnt-out Moria camp groups of migrants sit at the kerbside and under olive trees. Some are carrying small bags, others are pushing shopping trolleys filled with blankets.
One woman from Afghanistan held her baby girl, born 25 days ago. She said she and her family had spent the night out in the open, as the police had not let them return to Moria. She said no one had brought them either food or water.
A few steps away in the blazing sun, a Syrian woman fed her baby from a bottle. Police have set up roadblocks preventing refugees from leaving the area to go towards the main town, Mytilene, and the port. When one migrant approached them, the police shouted "Go back, Covid, Covid!"
A young Afghan boy hunched his shoulders and frowned. "Lesbos no good," he said.
line
An eight-year-old barefoot Congolese girl told Reuters news agency she was hungry and "our home burned, my shoes burned, we don't have food, no water".
She had slept at the roadside with her mother Natzy Malala, who has a newborn infant. "There is no food, no milk for the baby," Natzy Malala said.

Witnesses have told the BBC that three people died in the fire but the Greek migration minister said there had been "no casualties, no loss of life".
He said that some people were returning to "safe areas" near the Moria camp, which was only designed to hold 3,000 people.

What happened at Moria?
Fires broke out in more than three places in a short space of time, local fire chief Konstantinos Theofilopoulos told state television channel ERT. Some protesting migrants hindered firefighters who tried to tackle the flames, he said.
The main blaze, which was initially fanned by high winds, was put out by Wednesday morning. Some 20 firefighters, 10 fire engines and a helicopter were sent to the scene.

The incident occurred just hours after reports that 35 people had tested positive for Covid-19 at the camp. Authorities placed the facility under quarantine last week after a Somali migrant was confirmed to have contracted coronavirus.
Mr Mitarachi said the fires "began with the asylum seekers because of the quarantine imposed". Some of those infected with the virus had reportedly refused to move into isolation with their families.
He did not say, however, that the fires were a deliberate act of arson aimed at destroying the camp.
But some migrants told BBC Persian that the fire had broken out after scuffles between migrants and Greek forces at the camp.
Several blamed "far-right Greeks" for the blaze after the announcement of coronavirus cases, and took photos of what they said were canisters used to ignite the flames.

Many migrants then attempted to carry their belongings to the port town of Mytilene but police had blocked roads. Others were reportedly attacked by locals as they tried to pass through a nearby village.