Paul Kagame to seek fourth term as President of Rwanda 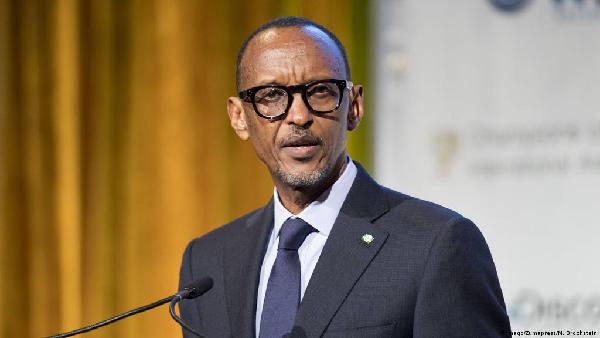 Rwanda's leader, who has been in power for two decades, has said he would consider remaining in office for another 20 years.

Paul Kagame told a French TV channel he would stand for president again at the next election in 2024.

In the last presidential election five years ago, official figures showed he won 99% of the vote, which many outside the country dismissed as a sham.

Asked if he would seek re-election, Mr Kagame, who is 64, said: "I would consider running for another 20 years. I have no problem with that. Elections are about people choosing."

Human Rights Watch's Central Africa Director Lewis Mudge told the BBC "what comes as a surprise is that some people are indeed surprised."

"Rwanda is a country where it's very, very dangerous to oppose the government, let alone to be a political opponent... and this authoritarian system is going to be the system for the foreseeable future," he said.

One prominent Rwandan critic has even stronger words.

"If he continues for another 20 years Rwanda will be real hell," Charles Kambanda, a lawyer and university lecturer now based in the US, tells the BBC.

Mr Kambanda says Rwandans already live in a climate of fear, and alleges that more than one minister has told him that they remain in government because they fear being assassinated if they leave.

President Kagame however has fiercely defended Rwanda's record on human rights, most recently at a Commonwealth summit in the capital Kigali in June.

Months earlier, in April, the UK announced controversial plans to send some asylum seekers who reach its shores to Rwanda for processing and potential asylum there instead.

That was condemned by the UN who likened it to "trading commodities", but the British prime minister's office has vowed to press ahead with the policy despite Boris Johnson's departure.

Mr Kagame himself came to power in 1994 after his rebel forces helped end the genocide.

Since then he has positioned himself as a champion of development, but his critics say he maintains a tight grip over what is an authoritarian regime.