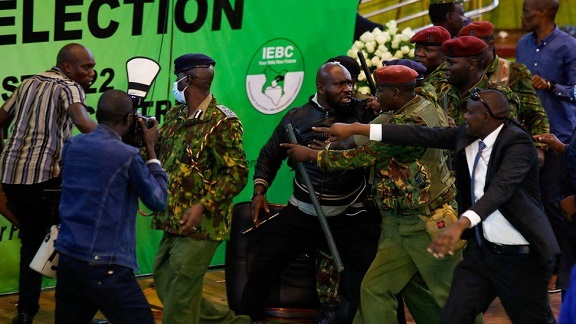 The announcement was marred by scuffles, allegations of vote-rigging and a divided electoral commission
Shares

Deputy President William Ruto has been elected the country's fifth President, according to the electoral commission.

Ruto succeeds outgoing President Uhuru Kenyatta who did not support his candidacy. Kenyatta is in the twilight of his presidency and will leave office later in August.

Earlier Monday his rival Raila Odinga's coalition rejected the yet to be announced results by Kenya's Independent Electoral and Boundaries Commission (IEBC).

The national tallying center descended into chaos shortly after Odinga's coalition rejected the results, with fighting breaking out and chairs being thrown in the building.

The IEBC's vice chair Juliana Cherera was among those disputing the results.

During the campaign, Ruto described himself as the "hustler-in-chief," citing his humble beginnings as a chicken seller who fought his way up to the top of Kenyan politics.

Analysts had predicted a win for his rival Raila Odinga, given his performance in opinion polls and the government support he enjoyed.

But Ruto's populist "man-of-the-people" approach that rejected political dynasties and played on anti-elite sentiment in the country, endeared him to voters.

Political analyst Herman Manyora told CNN ahead of the election that "Ruto has excited the youths ... almost in a euphoric sense."

Ruto, a former teacher who holds a doctorate in plant ecology from the University of Nairobi, has pledged to prioritize Kenya's economy and "uplift ordinary citizens" as president.

He will come under pressure to provide solutions to Kenya's pressing economic problems, including growing debt, high food and fuel prices, and mass youth unemployment.

Ruto has a long and varied history in Kenyan politics and was also tried alongside President Kenyatta in 2013 at the International Criminal Court in the Netherlands for alleged crimes against humanity following deadly violence in the 2007 elections. However, the charges were later thrown out.