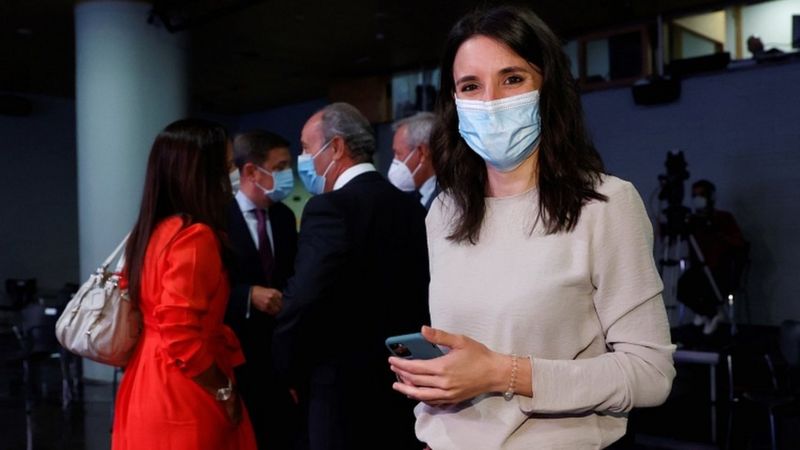 The Spanish government has said it wants to change the law to allow 16 and 17-year-olds to seek an abortion without parental permission.

Equality Minister Irene Montero said women should have the right to "decide about their bodies".

In 2015, the ruling Popular Party (PP) changed Spain's abortion laws and mandated parental consent for those aged between 16 and 18.

Abortion is legal in Spain in the first 14 weeks of a woman's pregnancy.

On Wednesday, Ms Montero said the reform was "more than necessary".

She added that other measures would be introduced, including a greater focus on sex education which she described as a "vaccine" in the fight against gender violence.

The law change would also include the right to the "newest forms" of contraception, the minister told a parliamentary commission.

The government is aiming to repeal the reform - introduced by the PP in 2015 - which established the obligation of parental consent in the case of girls between 16 and 18-years-old who wanted to end their pregnancy.

But to be able to change that rule they would need the backing of an absolute majority in parliament, which is 176 votes

Abortion was first legalised in Spain in 1985 in cases of rape or physical damage to the mother or child.

The scope of the law was broadened in 2010 by the last socialist government, which allowed abortion up to 22 weeks in cases of foetal deformities.

In 2014, then Prime Minister Mariano Rajoy dropped plans to limit abortion to cases of rape or where the mother's health was at serious risk.

The proposals drew widespread opposition and prompted dissent in Mr Rajoy's Popular Party, despite being part of its election programme in 2011.

The government instead changed the law to stop 16 and 17-year-olds having an abortion without parental consent.