Trump says he is doing well, but next couple of days the 'real test' 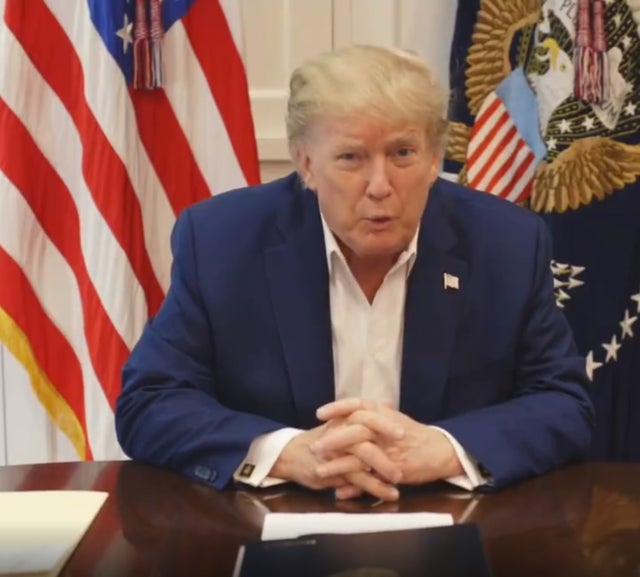 US President Donald Trump says he is doing well, but that the next few days will be the "real test".

He posted a video on Twitter ahead of a second night in hospital, where he is being treated for Covid-19.

The president's physician said late on Saturday that Mr Trump had made "substantial progress" but was "not out of the woods yet".

Saturday had been marked by a flurry of apparently contradictory remarks about the president's condition.

Sources close to the president said he was not happy about Mr Meadows' comments.

A number of people around the president have tested positive, including First Lady Melania Trump. Many of them attended a crowded White House event last weekend on the nomination of Amy Coney Barrett as a Supreme Court judge. It is being scrutinised as a possible "super-spreader event".

According to US media, the latest positive test has been for Nicholas Luna, a close personal assistant to the president.

The president's positive Covid-19 diagnosis, which he made public in a tweet early on Friday, has upended his election campaign. He faces Democratic challenger Joe Biden on 3 November.

What did Trump say in his video from hospital?
In the four-minute message posted late on Saturday, Mr Trump, dressed in a suit jacket and shirt with no tie, thanked the doctors and nurses at the Walter Reed National Military Medical Center close to Washington DC, where he is being treated.

"I came here, wasn't feeling so well, I'm much better now," he said, later adding: "Over the next period of a few days I guess that's the real test. We'll be seeing what happens over those next couple of days."

He said he wanted to get back on the campaign trail.

"I'll be back. I think I'll be back soon. I look forward to finishing up the campaign the way it was started," he said.

What do we know about his condition?
A series of statements on Saturday painted a confusing picture, but the latest update from Mr Trump's physician, Dr Sean Conley, says "while not yet out of the woods, the team remains cautiously optimistic" about the president's condition.

He could not give a timetable for discharge.

In an earlier update on Saturday morning given outside Walter Reed hospital, Dr Conley had said the president was not being given extra oxygen and had been fever-free for 24 hours.

But comments from Mark Meadows to journalists given after that news conference painted a much more downbeat picture.

"The president's vitals over the last 24 hours were very concerning and the next 48 hours will be critical in terms of his care," he said, adding: "We're still not on a clear path to a full recovery."

The comments reportedly angered Mr Trump and Mr Meadows later tried to clarify his statement on Fox News, saying the president had "made unbelievable improvements from yesterday (Friday) morning, when I know a number of us, the doctor and I, were very concerned".

He said Mr Trump "had a fever and his blood oxygen level had dropped rapidly", although there was "never even a risk of a transition of power".

Sources have told US media that Mr Trump did receive supplemental oxygen at the White House.

At Saturday's morning news conference, Dr Conley had refused to say whether the president had ever been on oxygen despite being repeatedly questioned. "None at this moment and yesterday with the team, while we were all here, he was not on oxygen," he said.

Dr Conley later said he "misspoke" when appearing to suggest Mr Trump had been diagnosed with Covid-19 as early as Wednesday.

The president, being 74, a man and someone categorised as obese, is in a higher-risk category for Covid-19. He has so far been treated with an experimental drug cocktail injection and two doses of antiviral medication remdesivir.

Mr Trump's team said he spent most of the afternoon "conducting business and moving about the medical suite without difficulty".

First Lady Melania Trump, who also tested positive for Covid-19, is said to be doing well, and continues to rest at the White House.

Who else around the president has tested positive?
Aside from the president and the first lady, at least six other people who attended the Rose Garden event for Amy Coney Barrett are now confirmed to have the virus.

On Saturday, campaign adviser and former New Jersey Governor Chris Christie, 58, became the latest attendee to report a positive result. He has checked into hospital in the state. He says he has mild symptoms but a history of asthma.

Other people to have tested positive around Mr Trump include close aide Hope Hicks - believed to be the first to show symptoms - campaign manager Bill Stepien and former White House counsellor Kellyanne Conway.

Nicholas Luna, the latest person reported to have tested positive, is a personal assistant or "body man" of the president. He is in constant contact with Mr Trump, handling his papers.